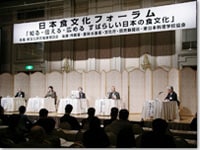 On February 9, the Japan Food Culture Forum was held in Tokyo. This organization is sponsored by the Japanese Food Culture Study Conference (Chairman: Yuzaburo Mogi, Kikkoman Corp.), which was established by interested parties in the private sector last April. The Forum’s goal is to conduct broad public relations both domestically and internationally on the excellence of Japanese cuisine.

Mr. Mogi, Chairman and CEO of Kikkoman Corporation, delivered the keynote speech in which he proposed to transmit Japanese food culture by branding Japanese food products, while encouraging research and related activities in Japan and overseas.

Afterwards a panel discussion was held. Panelists included Japan’s top chefs, food specialists, professors, and company and school presidents, who examined the characteristics of Japanese food culture and how it developed. This was followed by a lively dialogue on the current status and issues of Japanese food culture outside Japan and the global dissemination of Japanese culinary culture. During the closing reception, participants had the opportunity to sample various Japanese foods, including sushi, tempura and yakitori, as well as various local dishes. Attending the reception were Forum supporters Mr. Kenji Kosaka, Minister of Education, Culture, Sports, Science and Technology, and Mr. Shouichi Nakagawa, Minister of Agriculture, Forestry and Fisheries.