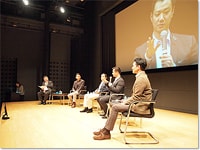 In December 2013, "washoku traditional dietary cultures of the Japanese" were added to UNESCO's Intangible Cultural Heritage list. In recent years, it has been observed that traditional Japanese food culture is deteriorating in Japan, owing to a range of issues that include eating alone and unbalanced nutrition because of changes in diet. As an Intangible Cultural Heritage, washoku was noted for its inclusion of "various fresh ingredients, its use of natural tastes and its well-balanced and healthy diets." This recognition by UNESCO is expected to reaffirm the distinctive advantages of washoku, which will help nurture and promote traditional Japanese food culture, not only abroad, but in Japan.

Over the years, Kikkoman, the leading manufacturer of traditional Japanese soy sauce seasoning, has set forth various initiatives to support the growth of washoku. One of the most recent of these was held in Tokyo in November 2013, when Kikkoman sponsored a panel discussion titled "Praising the Appeal of Japanese Cuisine: Washoku is Wonderful!" With an eye to enhancing next-generation awareness of washoku, the panel comprised four young chefs of Japanese cuisine: Mr. Takuji Takahashi of Kinobu; Mr. Hisato Nakahigashi of Miyamasou; Mr. Yoshihiro Takahashi of Hyotei; and Mr. Naoyuki Yanagihara of Kinsa-ryu Yanagihara School of Traditional Japanese Cuisine. The lively discussion was led by coordinator Mr. Hitoshi Kakizawa.

Each chef is based in either Kyoto or Tokyo, and all are active in promoting washoku in Japan and abroad. Their discussion touched on issues that included various aspects of washoku, its value and appeal, while inspiring the audience to cook washoku recipes with ways to include them in their daily diet.

The four chefs later held a series of four cooking classes, wherein participants learned not only how to prepare the basic washoku meal of ichiju san-sai (one soup and three dishes, served with rice and pickles), but how to take a comprehensive approach to washoku, including tips on tableware and food arrangement. In addition, they introduced the sensibility of seasonal elements in washoku, together with how traditional festivals and celebrations influence Japanese cuisine.

For over 50 years, Kikkoman has been promoting its soy sauce around the world. Through its business activities, the company is also committed to the global introduction of Japanese food culture in its promotion of the international exchange of food cultures; this is an integral part of its management philosophy. This philosophy is called "Kikkoman's Promise," which proposes a well-balanced and nutritious diet that brings out the flavor of the ingredients. Kikkoman aims to contribute to a greater awareness of washoku and encourage its role in daily life. By creating delicious dishes through encounters with other food cultures, Kikkoman continues to advance a clearer understanding of this healthy dietary approach and its relevance to our lives, our times and our cultures.