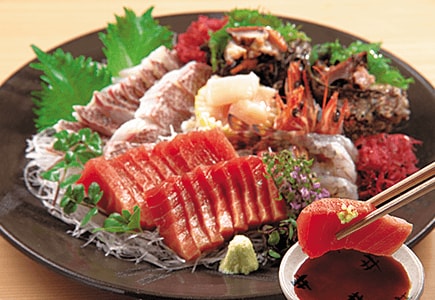 Sashimi served with a dab of wasabi

Wasabi is a plant native to Japan, traditionally used in herbal healing. Today it is known more commonly as a condiment that accompanies a wide variety of Japanese dishes, including soba, sashimi and sushi.

Wasabi is an aquatic plant with a thick rooted stem called a rhizome that lies beneath the water’s moving current; its leaves grow above the water level. Thin, fine roots from the rhizome burrow underground, and these hold the entire plant in place. The color of wasabi is a beautiful light green, reminiscent of fresh leaves in springtime; it is best known, however, for its refreshing fragrance and pungent flavor.

Wasabi is known for its pungency

Wasabi is delicate and thrives only in waters whose temperatures range between 10 to 17ºC (50-62ºF). Wild wasabi may be found in isolated mountain streams, while cultivated plants are grown in special fields called wasabi-da, typically situated in cool regions with fresh running water. The plant develops so slowly that it can take up to three to four years before it can be harvested for shipping. Wasabi cultivation is believed to have begun in today’s Shizuoka Prefecture around 1600, when the Edo shogunate was first established. Later on, the habit of eating soba, sashimi and sushi with wasabi became popular.

To prepare wasabi for eating, the rhizome is grated using a very fine grater, such as one with a traditional dried sharkskin surface. Slowly grating the wasabi in a circular motion breaks down sinigrin cells, causing them to interact with enzymes, thus creating wasabi’s peppery sharpness. This effect peaks in the few minutes after grating, and the grated root stays tasty for less than 30 minutes; for this reason, it is best to prepare only small amounts of wasabi as needed. Wasabi complements raw fish and other foods, and has antiseptic properties that can prevent food poisoning. Moreover, it contains large amounts of vitamin C, which supports digestion and stimulates the appetite. 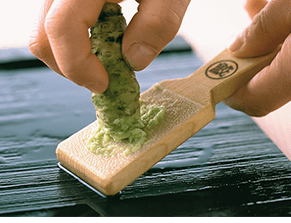 Today, wasabi paste is widely available in convenient, easy-to-use plastic tubes or packets tucked into take-out sushi or for use at home: just a small squeeze produces the desired amount of wasabi.