Hamo, or pike conger, is a popular food eaten in Kyoto during the summer. Hamo are similar in appearance to eel, but have sharp teeth and inhabit ocean beds and mudflats. Plentiful in vitamin A, hamo meat is white but contains considerable fat, which lends it a rich flavor.

People of landlocked Kyoto have eaten hamo for over 1,000 years. Peddlers known as katsugi transported fresh fish to the city from places such as neighboring Osaka in boxes or buckets filled with seawater. In the hot summers, delivering fresh fish was difficult, but hamo are particularly robust and were able to survive the transport to Kyoto—a quality that gives this fish its reputation as a stamina food.

Hamo is full of vitamin A and has a rich flavor

More so than other fish, hamo have a great many small bones that are difficult to remove, making the fish unfit for eating as-is; thus it was often ground up for consumption. Eventually, Kyoto cooks developed a special method called honekiri to cut up these bones using a special knife. The stomach is opened, the backbone removed, and 26 fine cuts are made every 3 centimeters without cutting into the skin. Thanks to this method, hamo is soft when eaten, with no hint of any bone in the mouth. It may take nearly a decade for a chef to acquire proper honekiri skills in order to become a full-fledged master of the art.

When preparing hamo, no part of the fish is wasted. The head and bones are used to make dashi stock, and the meat may be served in a variety of ways. Parboil a honekiri-treated hamo and it curls back to open up its white meat like a flower blossom: botan-hamo is a soup where the fish resembles a botan (peony). Chill with ice water for hamo no otoshi, eaten with ume (pickled plum) paste and mustard-vinegar miso; or enjoy the ever-popular hamo-sushi, sushi of hamo meat glazed with soy sauce-based teriyaki sauce. 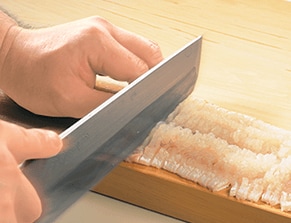 Honekiri, the art of cutting the small bones
of the hamo with a special knife

Hamo spawn in the autumn, so the fish tastes best around July after the rainy season, when it takes on just enough fat. Kyoto’s annual Gion Festival is held around that time, and is known locally as the Hamo Festival. The people of Kyoto look forward to the season’s most delicious hamo on the day of the festival’s famous Yamaboko parade.