Many of Japan’s fermented foods are made by inoculating steamed grains such as rice or wheat with koji, otherwise known as the fungus Aspergillus oryzae. Depending upon the grain used, the end result may be rice koji, wheat koji or bean koji.

There are two types of koji. The variety used in Japan is bara koji, made by growing mold on steamed rice or wheat grain. The second variety is mochi koji, made by crushing raw or heated grain and solidifying it by kneading with water and then growing mold on it. Many alcoholic beverages in China, Korea and other East Asian countries are made using mochi koji. Bara koji is used in making many of Japan’s traditional fermented seasonings and foods, including sake, distilled spirits, miso, mirin, soy sauce and various pickles, which are all fermented through the interaction of yeast, lactic acid bacteria and koji, and gradually aged.

In recent years, Japan’s traditional koji has attracted new attention—particularly salt koji (shio koji) and soy sauce koji (shoyu koji). Salt koji, which can be made at home simply with rice koji, salt and water, has become popular as an all-purpose seasoning for various dishes. The method for making it calls only for mixing rice koji and salt, adding water, then keeping the mixture in an airtight container for a week to ten days at room temperature, stirring once a day. Salt koji can be stored in a refrigerator for about six months. Soy sauce koji is made by adding soy sauce rather than salt to the rice koji.

These two types of koji have become so popular that many recently published recipe books and food magazines feature them. One reason for this current enthusiasm is that, when salt koji or soy sauce koji are used to season or marinate meat, or if they are added to a particular dish, its delicious umami flavor is enhanced and meat stays tender even when cooked. 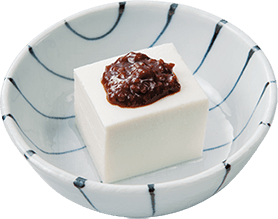 Food manufacturers are jumping on the bandwagon and now sell salt koji, soy sauce koji and processed foods such as dressings or soups that contain them. Kikkoman, for example, features them in a nabe (hot-pot) soup and marinade seasoning. Some snacks such as cookies and potato chips have added salt koji, while trendy restaurant menus list meat dishes or salads that have been prepared with it. The appeal of koji has gone beyond its traditional roots, as innovative uses in cooking and preparation continue to be discovered.