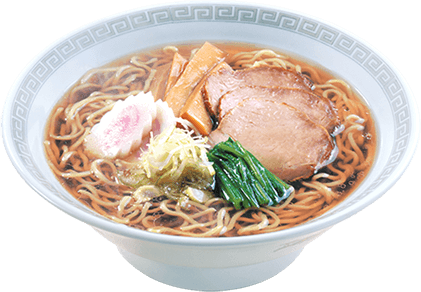 Ramen noodles can trace their origins to China, but this traditional dish is now so entrenched in Japanese food culture, it’s taken on a local identity all its own. Basic Japanese ramen is composed of soup, noodles and toppings. The soup comprises mixed broth made from fish, pork or chicken, with seasonings such as soy sauce, miso or salt. The noodles themselves are made from wheat and lye water—the lye water lends the noodles their distinctive texture and color.

Ramen made its first forays into Japan soon after the country opened to the world, after nearly two centuries of national seclusion. In ports such as Yokohama, various “Chinatowns” flourished, where Chinese restaurants served shiru-soba Chinese noodle soup. In 1910, the first ramen specialty restaurant opened in Tokyo; later, following the Second World War, Japanese evacuees from China set up ramen carts (yatai) on the streets, feeding Japan’s growing taste for ramen. As a love for ramen spread throughout the country, the dish acquired distinctive regional styles—and in the process, became wholly Japanese.

Around the 1960s, new ramen varieties debuted. These included miso ramen, unique in that it used the Japanese traditional condiment miso in its soup; another was tsukemen, whose soup and noodles are served separately and enjoyed by dipping a portion of noodles into the soup. From the 1990s onward, gotochi (meaning “local”) ramen flavors emerged, including Hokkaido’s Asahikawa ramen, which is soy sauce-flavored with pork-bone and seafood broth; and garlic-infused Kumamoto ramen from Kyushu, with a choice of either light-color soy sauce or salt-flavored tonkotsu pork-bone broth. New trends and tastes continually tempt ramen-lovers: recently, tori-paitan (white chicken soup) ramen has created a stir.

Ramen is priced at about ¥500-1,000 (USD5.00-10.00) per bowl, and although there are ramen chain restaurants, most ramen shops are independent, and these tend to obsess about the ramen they serve. Passionate and dedicated ramen cooks consider the affinity and texture of the noodle (thick futomen, thin hosomen, or curly chijiremen) relative to the soup and other ingredients. Some restaurants allow diners to customize their ramen by specifying noodle texture and their selection of toppings, which typically include seasoned boiled egg, bean sprouts, corn and dried nori seaweed. These are all in addition to basic ingredients such as roast pork, chopped Japanese long onion or green onion and seasoned bamboo shoots.

Japanese media regularly feature the latest unique, delicious ramen eateries, and although the publicity can sometimes trigger long lines, these are often well worth the wait. Many ramen lovers enjoy visiting popular restaurants in different areas to experience and compare its many variations.