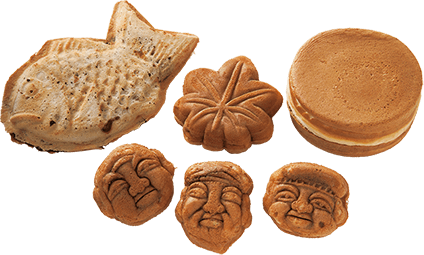 Among the vast range of baked confectionery, some are made with special molds, such as those used in making waffles. In Japan, such molded confections are particularly delicious and decorative; these hand-held treats are typically filled with an sweet adzuki bean paste, and are fun and easy to eat for both adults and children. This confectionery is usually made of wheat-flour batter baked in hinged molds, whose shapes include fish, animals, plants and even mythical gods. They are made by spooning dollops of an onto a layer of batter in the mold, covering with more batter, then closing the mold lid to cook.

These popular snacks include the round, an-filled imagawa-yaki. This cake dates to the 1700s, and its name refers to the Imagawa bridge in old Edo (Tokyo), which was near the first shop to sell them. Imagawa-yaki are available throughout the country, reasonably priced at about 100 yen (USD1.00) each. Another crowd-pleaser is the evocative tai-yaki, which is also filled with an. Dating from the early 20th century, it takes its shape from the lucky tai, or sea bream, a fish whose name is phonetically similar to medetai, meaning “happy” or “auspicious.” Tai-yaki may be baked in either individual or batch molds; some prominent shops boast distinctive tai-yaki styles or flavors, drawing lines of fans who wait patiently to enjoy freshly baked cakes with their crispy outer crust and thick filling of homemade an. Another favorite is ningyo-yaki, which likely originated in a Tokyo neighborhood called Ningyocho. Stuffed with an, these small, soft confections represent the plump faces of Japan’s Seven Gods of Good Fortune. Beyond Tokyo, various regions of Japan are known for original special confections that symbolize some unique aspect of the area. One of these is Hiroshima’s an-filled momiji-manju, a pretty maple-leaf shaped confectionery that references the region’s famous views of maple trees.

These days, those with a sweet tooth can find these cakes in a tempting range of shapes and flavors, and new, sometimes unexpected combinations appear regularly. There are bite-sized versions of tai-yaki, and those made with croissant batter, for example, while ningyo-yaki may appear in the shapes of popular characters.

Fillings might include chocolate, custard, matcha green tea cream or even cheese. Although the mechanized production of baked confectionery predominates to a large extent, hand-made baked confectionery still draws hungry crowds who watch the time-honored molding process and enjoy its fresh, traditional taste.