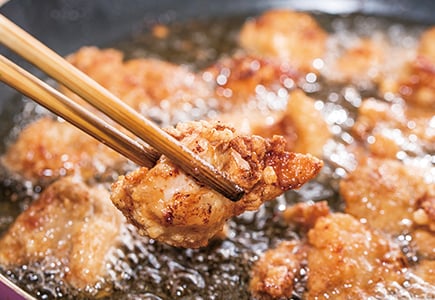 Japanese deep-fried chicken, tori-no-karaage—called simply karaage—is said to have made its first appearance on restaurant menus in 1930s Tokyo. The word karaage itself, strictly speaking, refers to a general cooking method wherein seasoned or unseasoned ingredients are coated with flour or starch and deep-fried. Not only chicken, but fish, pork and vegetables can be prepared this way, but chicken karaage is so popular that, in Japan, people automatically think of “chicken” when they hear the word “karaage.”

Before deep-frying, the chicken is cut up and marinated briefly in a blend of soy sauce mixed with sake, mirin, garlic, ginger and other seasonings, then coated with wheat flour or potato starch, which makes for an exceptionally crunchy outer skin and moist, tender meat. Karaage is not only considered a main dish at meals, it appears in bento lunch boxes and at picnics, because it tastes delicious, hot or cold, and is easy to eat. This is a dish made not only at home: in convenience stores, pre-made karaage is kept warm and sold right by the cash register to tempt the appetite; it is found in supermarkets and bento shops, sometimes marketed as a snack to accompany drinks. Even frozen karaage is available. There are many take-out karaage shops in Japan, each with its own unique style. Boneless thigh or breast meat is typically used, but some shops swear by bone-in meat. Much of prepared karaage is made-to-order, and customers take away crispy hot chicken.

Arguably, Japan’s karaage culture is most deeply rooted in Oita Prefecture, located on Japan’s southern island of Kyushu—an area once known for its numerous chicken farms, and where people are said to eat more chicken compared to other prefectures. The city of Nakatsu in northern Oita, in particular, boasts approximately sixty take-out shops specializing in karaage, each with its own custom recipe—satisfying not only residents, but drawing hungry tourists who visit the region to sample delicious karaage variations.