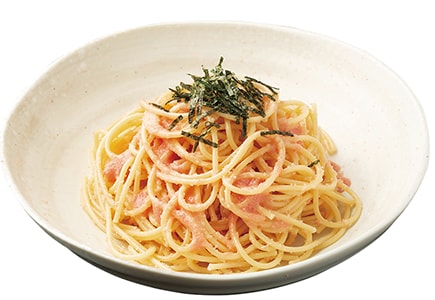 Japan is well known for its delicious interpretations of Western dishes, and its fusion recipes that highlight Japanese ingredients with pasta are no exception. While authentic Italian-style pasta is a favorite here, a very special, well-loved variety is wafu pasta, literally, “Japanese-style” pasta. This term covers a wide array of pasta dishes, including spaghetti, which are prepared using combinations of classic ingredients rooted in washoku Japanese traditional cuisine. Some of these include, to name only a few, tarako salted cod roe, natto fermented soybeans, uni sea urchin, umeboshi pickled Japanese apricots and nori seaweed. The pasta itself is typically seasoned with dashi broth and soy sauce, an occasional dash of kobucha, or with butter or/and olive oil. 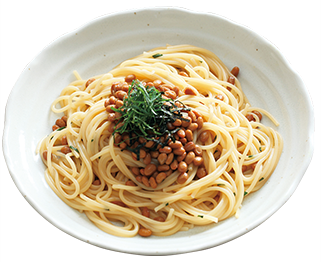 This pasta fusion concept likely made its first appearance in the foreign settlement in Yokohama in the late nineteenth century; it was only after pasta-making machines were imported from Italy in the mid-1950s, however, that such dishes truly grew in popularity. One reason may be because udon and soba noodles were ingrained in the national cuisine, making it all the easier for pasta to find general acceptance. To accommodate Japanese tastes, from the mid-1950s into the mid-1980’s pasta was made using bread flour, rather than semolina flour. Semolina, made from durum wheat, is used in making genuine Italian pasta, but at that time it was in short supply; moreover, the Japanese inclined towards a softer noodle texture. It was in the mid-1980s that 100 percent semolina pasta became available here, following a boom in Italian cuisine that prompted a greater appreciation for al dente pasta. In the meantime, specialty restaurants began to serve wafu pasta, and these now can be found everywhere. Nowadays, consumers also enjoy a tantalizing variety of both Italian-style and wafu-style pastas, including pre-packaged sauces and microwave-ready frozen products sold in supermarkets and convenience stores.