The furoshiki dates back as far as the 8th century, when it was called tsutsumi, which means “to wrap.” This deceptively simple, extremely versatile square piece of cloth is used to wrap and carry various things. Similar types of wrapping cloth exist worldwide, but in Japan, furoshiki came into broad use during the 16th century, when public bathhouses (furo) appeared and they were used at the baths. During the Edo period (1603-1867), furoshiki became even more popular as convenient carriers for a wide range of goods.

When presenting gifts in Japan, it is traditionally considered courteous for the presenter not to touch the item directly—and so gifts are wrapped in a furoshiki. A special type of furoshiki known as fukusa has been used for generations to wrap monetary gifts for celebrations or condolences, such as at weddings and funerals. 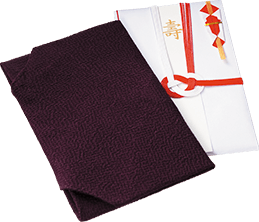 Fukusa and monetary envelope for a wedding

Furoshiki come in many colors and patterns, some with the family crest. Furoshiki are ideal for wrapping objects of different shapes and sizes, and so are perfect replacements for paper gift-wrapping. After unwrapping the gift, the furoshiki is taken home by the giver. These days, this handy cloth has aroused a new appreciation, thanks to its ecological aspect, as it can be reused time and again.