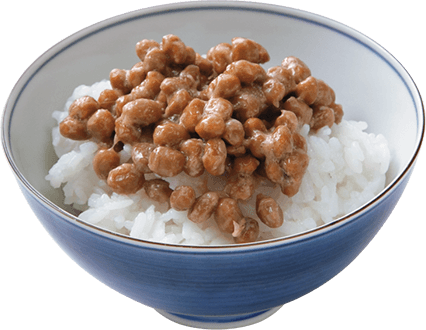 Although natto (fermented soybeans) is one of Japan’s most characteristic traditional foods, Japanese are strongly divided in their reaction to its sticky texture and strong smell: rarely indifferent, they either love it or hate it.

The origins of natto have been traced to China, and the habit of eating natto in Japan may date as far back as the Yayoi period (300 BC-AD 300). The Japanese have long enjoyed natto as a healthy food; it became common during the Edo period (1603-1867), when natto vendors sold it in the city streets.

Natto is made by soaking soybeans in water. Depending on the season, this takes around eight hours in summer and about 18 hours in winter. The variety and size of the soybeans also determine soaking time. After soaking, the soybeans are steamed, then sprayed with pure cultured bacterium called Bacillus subtilis natto; the treated soybeans are then placed in containers to ferment at around 40°C (104°F) for about a day. Traditionally, after soaking, the soybeans were boiled, wrapped in rice-straw, then warmed at suitable temperatures to ferment naturally with the aid of the Bacillus subtilis natto, which lives in the straw. 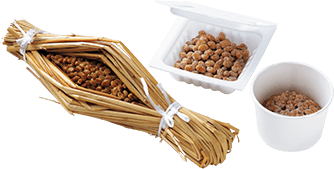 Left to right: Natto in traditional rice-straw wrapping,
and in polystyrene foam and paper packaging.

Natto is available in supermarkets and convenience stores throughout Japan, typically sold in sets of three small polystyrene foam containers or three paper cups. It is usually eaten by mixing with a little soy sauce, plus condiments such as karashi (Japanese mustard) and negi (Japanese long onions) atop cooked rice. Natto appears in many other dishes, including natto-maki (sushi rolls filled with natto) and natto-jiru (miso soup with minced natto).