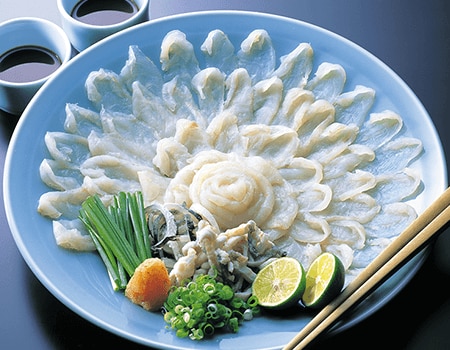 In Oita Prefecture on Japan’s southern island of Kyushu, the Bungo Channel is famous for its fugu blowfish, particularly tiger fugu (tora fugu), which are considered particularly delicious. Certain organs of the fugu are poisonous, thus specially qualified chefs must prepare the flesh. The entire fish is consumed in various ways: as sashimi, deep-fried, as a nabe one-pot meal, and in rice porridge made following the nabe— even the grilled fin is served in sake. High in protein and low in fat, fugu skin also boasts high levels of collagen. The mild sour taste and fresh smell of the citrus fruit kabosu, another Oita specialty, is a good match with fugu and is often used in a sauce to accompany sashimi and nabe.