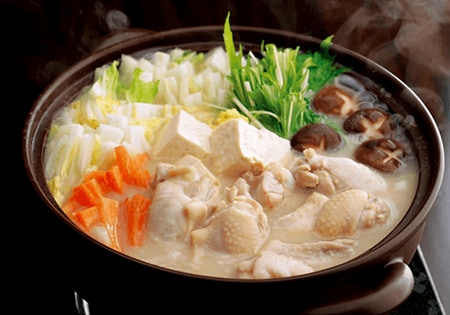 Mizutaki chicken hot pot is a specialty of Hakata ward in Fukuoka Prefecture. Mizutaki usually includes chicken and chicken meatballs, Chinese cabbage, tofu, and enoki and shimeji mushrooms, cooked in chicken stock. Mizutaki broth can be either milky or clear; it is made by bringing to a boil chicken and water at the same time, rather than adding chicken to an already boiling pot. Diners serve themselves directly from the hot pot and dip their bites in ponzu sauce, accompanied with chopped green onion and other condiments. As hot pot ingredients are eaten, cooked rice or noodles are added, allowing diners to savor the soup’s concentrated umami. During the Meiji period (1868-1912), mizutaki grew popular in Hakata; it eventually spread throughout Japan, which naturally led to variations in soups and dipping sauces. Most Hakata restaurants serve ponzu sauce using the juice of daidai, a variety of Fukuoka citrus.