The Introduction of Beef

Western-style foods have been steadily integrated into Japanese eating patterns for over one hundred years. Our new feature series looks at Japan’s food culture from the viewpoint of wayo setchu: the fusion of Japanese and Western cuisines. 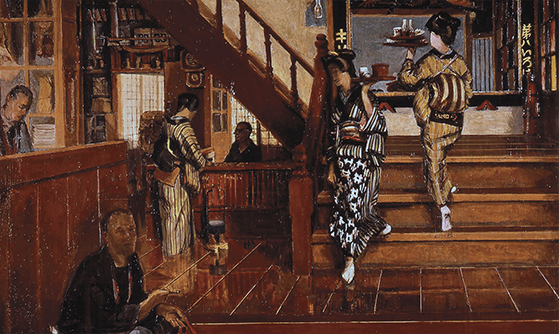 Gyu-niku-ten choba depicts a glimpse inside a gyu-nabe restaurant, by Shohachi Kimura, 1932. Courtesy of Kitano Museum of Art

Every nation has experienced at least one defining event or some pivotal turning point in its history—the French Revolution in 1789, or China’s 1911 Xinhai Revolution, for example. In Japan, that event was the Meiji Restoration of 1868.

Simply described, the Meiji Restoration marked the end of Japan’s ancient and elaborate feudal hierarchy of warrior clans, to be replaced by a modern nation-state. Perhaps the greatest transformation to characterize the birth of modern Japan, however, was the country’s departure from its policy of national seclusion that had been in place for over 200 years, to a stratagem that called for the systematic introduction of Western culture and thought—the vigorous process of modernization known as “civilization and enlightenment.”

The term wayo setchu—literally, the blending of the Japanese and the Western—expresses the new culture that resulted from the mix of traditional Japan with new trends brought in from the West during the mid-nineteenth century. This term also provided a way of establishing a firm grip on Japanese identity, as the country was enveloped by waves of Western culture and technology. No less affected was Japan’s cuisine: when we look at what was happening in the realm of food, we can see that the new key ingredient incorporated into the traditional diet was beef. Illustration of gyu-nabe from the novel Agura-nabe by Kanagaki Robun.
Courtesy of Yokohama Archives of History

Many parts of the world have taboos against eating meat. In Japan, the custom of eating beef was rare: it had not been consumed for more than a thousand years prior to the Meiji Restoration. This was because of a number of factors, including the strong influence of Buddhist thought. As a reaction to this taboo, when beef was first introduced in the face of Japan’s ancient dietary restrictions it was quickly perceived to be the essential component of Western cuisine. This perception prompted the emperor Meiji to add beef to his table soon after the Restoration—a decision which in turn led to the eager acceptance of beef by those who embraced “civilization and enlightenment.”

Obtaining ingredients for Western-style dishes was difficult enough, as was understanding the new cooking methods and manners of eating, and so the easiest way to eat this unfamiliar meat was through a wayo setchu compromise: the gyu-nabe beef hot pot. A literary work from 1871 entitled Agura-nabe ( “Cross-legged at the beef pot” ) comically portrays its characters dining at ease on gyu-nabe at a popular restaurant.

There were two varieties of early gyu-nabe beef pot: the more common featured beef slices cooked with negi (Japanese long onions) in a soy sauce-seasoned mixture; another, whose recipe was more complex, called for the pot itself to be rubbed with beef tallow before simmering the beef. These are clearly similar to the two main types of sukiyaki that are common today.

The reason we refer to gyu-nabe as a fusion cuisine is that it was derived from the concept of an old-time dish, gan-nabe, or goose meat pot. Beef was simply substituted for goose meat, and ground sansho pepper, the preferred spice for goose meat, was initially used in gyu-nabe.

One successful chain of gyu-nabe restaurants dating from the 1880s was known as Iroha. Its novel buildings featured windows with glass panes in five colors, and its gyu-nabe comprised an innovative balance of vegetables and meat together with a 2 Japanese Fusion cuisine: The Introduction of beef savory broth. We can get an idea of what the interiors of these restaurants were like from the 1932 painting Gyu-niku-ten choba ( “Entrance to a gyu-nabe restaurant” ) painted by the restaurant founder’s sixth son, who was a Western-style painter. The prosperity of specialty restaurants like these would not have been possible without some stable supply of its main ingredient, beef. Between 1882 and 1912, statistics show an increase every 10 years in the number of cattle slaughtered annually for meat in Tokyo: 4,789 (1882); 12,223 (1892); 28,085 (1902); 34,219 (1912)—in all, a more than seven-fold increase over three decades. Considering that until the Meiji Restoration, cattle had been used mainly for plowing fields and drawing carts—rarely as sources of meat for human consumption—it is impressive that beef cattle raised in Kobe, Omi (present-day Shiga prefecture) and Yonezawa (Yamagata prefecture) had already become famous in such a short period of time.

Most beef consumption during 1882 to 1912 could be attributed to gyu-nabe hot pot; only a fraction of Japan’s beef was prepared using “authentic” Western cooking methods. Japanese consumers seeking the sliced meat used in gyu-nabe expected their beef from Kobe, Omi, or Yonezawa to be tender, reminiscent of the flesh of fish they were accustomed to eating. Japanese did not show interest in Western cooking methods that focused on making tough meat more tender and delicious; rather, they focused on developing methods of breeding cattle which yielded finely marbled meat. In fact, Japanese have since become so fond of eating thin slices of marbled beef, that expatriates may long for it if they can’t find it in supermarkets or butcher shops.

Japan’s preference for tender, thinly sliced beef eventually led to the creation of the beef shabu-shabu hot pot—a purely Japanese innovation. When dipped briefly in hot broth, very thin, delicate pink slices of meat change color slightly, and are then enjoyed with various sauces and condiments, including momiji-oroshi (grated daikon with red pepper). This novel wayo setchu beef dish won nearly instant popularity: the word shabu-shabu had not yet appeared in Japan’s major dictionaries in 1970, but by the end of that decade, the term was part of the popular lexicon, and has since found dining fans worldwide.

Yo Maenobo was born in 1943. He is a specialist in Japanese Intellectual History and the author of many publications and academic papers such as Meiji Seiyo Ryori Kigen (The origin of Western-style dishes in the Meiji era), and Kindai Nihon Kenkyu, vols. 24 & 25 (Bulletin of modern Japanese studies), Fukuo giden, moshikuwa engisuru kosei (ken, kon) (Falsehood : a chronological biography of Fukuzawa Yukichi). His most recent publication is Mogi-to-Shinsei (Acculturation in Meiji era Japan).