Our four-part series has been taking a look at the nutritional aspects of washoku traditional Japanese cuisine, and how its foods relate to health. This final installment reviews findings which demonstrate that washoku has a beneficial influence on longevity. 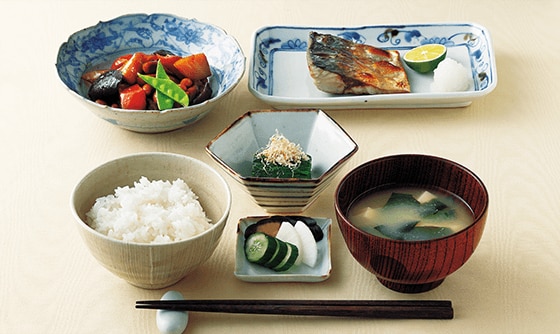 From 1985 until 2005, our Cardiovascular Diseases and Alimentary Comparison (CARDIAC) study surveyed over 60 different regions around the world. Our research involved the analysis of 24-hour urine samples taken from 200 men and women in each region. The global sampling measured the levels of excreted taurine, an amino acid abundant in fish and shellfish which supports cardiovascular function, and of isoflavones, antioxidants found in soybeans, which have a similar structure to that of female sex hormones. In a comparison of urine samples containing these substances, Japanese test subjects accounted for 90 percent of those demonstrating the greatest amounts of both taurine and isoflavones; there were no Japanese among those groups with smaller amounts of these compounds. The CARDIAC study established that death rates from heart diseases were lower in those groups with greater levels of taurine and isoflavones; this reflected the prevalence of fish and soybeans in their diets.

As mentioned in the second installment of this series (Food Forum Vol. 30, No. 2), those groups suffering from cardiovascular conditions which cause heart-related deaths have a lower average lifespan. Japan, however, has the lowest figures for deaths from heart-related conditions among the more economically advanced nations, and our survey results demonstrated that fish and soybeans help prevent such heart-related deaths (figs. 1 and 2). This remarkable longevity is due to fish and soybeans in the diet; yet the number of Japanese suffering from the so-called lifestyle ailments—obesity, high blood pressure, high cholesterol—has increased, and the average healthy life expectancy in Japan is now shorter than the average lifespan by about 10 years. Hyogo Prefecture, which accounts for about 4.5 percent of Japan’s population, has since 2001 conducted a campaign to encourage people to eat a balanced diet including rice, soybeans and fish, and to reduce their intake of salt. In 2012, we conducted our 24-hour urine tests to follow up this campaign, and observed that the eating habits of women had improved more than those of men. Women’s salt intake had decreased, their soy intake had increased, and thus their blood pressure and triglyceride levels had decreased. When we conducted 24-hour urine tests comparing samples of both men and women who often ate fish and soy with those who seldom ate them, we found that the former group had increased their levels of “good” HDL cholesterol, which protects against arteriosclerosis, by 10 percent. The fact that women inherently have 10 percent more good HDL cholesterol than men is thought to be related to the tendency for women to live longer than men. With frequent intake of soybeans and fish, people may live longer by six or seven years, which offsets the difference in longevity between men and women. This study also found that those who ate both soybeans and fish had higher levels of folic acid. In the U.S., folic acid has been recognized for its efficacy in protecting against heart diseases, and is even used as an additive in grain products. Recent studies indicate that it may also be effective in staving off dementia. A diet of both soybeans and fish is to be recommended, although our study found that those who consumed both also had high levels of both sodium and potassium. Potassium alleviates the adverse effects of excess sodium; in another study dated 2004, for one month we had 70 businessmen eat a healthy bento lunch box containing potassium-rich vegetables. After one month, their body fat levels and blood pressure had fallen, and among those who ate soy and fish instead of meat, their proportion of good cholesterol to bad cholesterol had increased. Moreover, we discovered that eating a vegetable-rich menu for lunch for at least two weeks’ duration had the effect of lowering sodium intake by three grams daily. In any case, we advise eating soybeans and fish with moderate amounts of salt. Our worldwide survey data suggest that if this practice were to be continued throughout one’s life, it would potentially reduce the risk of stroke by half.

Japan has a tradition of holding rites to anticipate the coming of spring. The custom is to hang a sardine head at the entrance to the house and throw roasted soybeans, while calling out, “Devils out! Good luck in!” Each person then eats the number of beans corresponding to his or her age plus one, and prays for good luck and long life. Symbolically, the fish and the soybeans represent the essence of a healthy diet: fish contains taurine as well as DHA, an omega-3 fatty acid associated with smoothing blood flow and brain function; two handfuls of soybeans contain soy protein and isoflavones which need to be taken daily to prevent heart diseases. The secret to health and long life is indeed to eat soybean products and fish with moderate amounts of salt, along with plenty of vegetables and seaweed: this is Japan’s traditional washoku.

The third installment in this series (Vol. 30, No. 3) described how our CARDIAC study added soy and fish components to bread eaten by Brazilians of Japanese descent, those living in Scotland, and Australian aboriginals. After introducing these changes into their respective diets, these diverse populations were found to have lowered blood pressure and cholesterol levels. If the beneficial components of washoku were to find a place among the rest of the world’s various food cultures, they might well prevent the early death of over 60 percent of the world’s population—a literal casting out of the devilish scourge of lifestyle ailments.