Annual Events and Traditions (No. 1)

Spring: From the New Year to Cherry Blossoms

Japan’s annual cycle of seasonal observances revolves around the ancient lunar calendar. In this new feature series, Food Forum highlights the very special foods that define these celebrations. Our first installment opens with the symbolism and traditions of the New Year and of new beginnings. 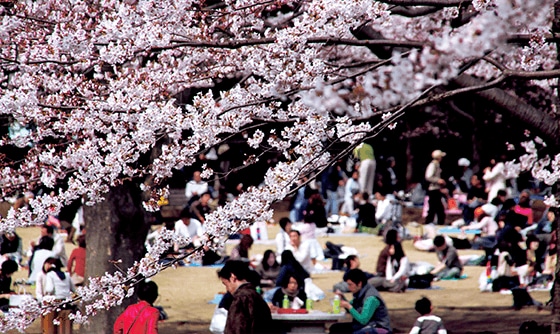 In springtime, all of Japan enjoys the spirit of renewal promised in the blossoming of the cherry trees. In traditional hanami flower-viewing parties, friends, colleagues and family gather beneath the trees to share food together.

The rhythms of life in Japan are neatly matched to the changes of its four seasons. The annual harvest of rice, staple of the Japanese diet for centuries, is realized through the steady cycle of the seasons, and Japanese traditionally regard this abundance of nature as a blessing imparted by their ancestors. Traditional belief holds that ancestral spirits appear in the world in the form of deities, bringing blessings and happiness; thus an abundant harvest is considered a boon for their descendants. From ancient times, people have prepared seasonal foods as offerings to those deities thought to visit this world and mingle among the living. The living partake of these foods with the spirits, then usher their spiritual visitors back to their own realm. Traditional foods in Japan are thus closely connected with customs related to belief in the divine. At the end of every year, preparations begin with cleaning and tidying to welcome the deity of the New Year. Kadomatsu, beautifully prepared festoons of pine and bamboo, are arrayed at entrances to homes and offices to serve as abodes for heavenly spirits. It is customary to cook with drawn water to signify renewal at the start of the New Year. Mochi cakes of steamed glutinous rice, pounded in a mortar, are essential, placed on altars along with a variety of decorations as offerings to express gratitude to the deities. Mochi is a popular food in Asia; in Japan, its traditionally round shape is said to represent the human heart, within which the spirit dwells. In the past, small round mochi cakes were presented to children by their parents as otoshidama to convey this sensibility; these days, cash is given. Like Christmas presents from Santa, otoshidama have long been symbolic of happiness received from the gods. Traditionally served on New Year’s day is zoni soup, which contains mochi and vegetables. Interestingly, the shapes of mochi in zoni differ by region: square cakes are preferred in eastern Japan, and round ones are more popular in the western part of the country. Just as indispensable as New Year’s mochi are the festive foods known as osechi ryori. Traditionally, these are the most extravagant foods eaten during the year, served in beautifully crafted lacquered boxes called jubako. The foods themselves are made using ingredients whose names or appearance are auspicious. Examples include shrimp, symbolic of long life with their long “whiskers” and curved bodies evoking the bent back of an elderly person. Yellowtail is a fish whose Japanese name changes along with the stages of its life cycle, a concept suggestive of successful advancement in life. Chestnuts are referred to as kachi-guri, “victory in competition”; herring roe connote prosperity for one’s descendants; tazukuri are small dried fish with sesame seeds in a sweet soy sauce-based seasoning, whose name implies “industrious cultivation of fields.” Osechi ryori also includes kamaboko steamed fish cake in the pink and white colors associated with felicitous occasions; rolled kombu, whose name evokes the word yorokobu for “happiness”; and festive yellow-and-white layered nishiki-tamago egg cakes.

When the traditional New Year’s period ends, mochi cakes are removed from the display of offerings and consumed in a sweet soup made with adzuki beans and reheated mochi. When the kadomatsu and other decorations are taken down, it is customary to take them to a local shrine where they are given a ceremonial burning. The visiting deities then rise with the smoke to return to their world. Setsubun is held on the day before the beginning of spring, which generally falls in early February. Certain rituals are observed to drive away ill fortune and summon luck. Soybeans are roasted, and one eats just as many beans as their age; the beans are also taken in hot tea on auspicious occasions. The highlight of Setsubun involves opening windows and doors and tossing out the soybeans while chanting, “Out with bad luck, in with good luck!” One person dons an oni demon mask, while others toss the beans to symbolically drive it away and invite good fortune. Traditional spring rites in Europe involve similar demon masks, reflecting the hope for renewal—a feeling shared around the world. 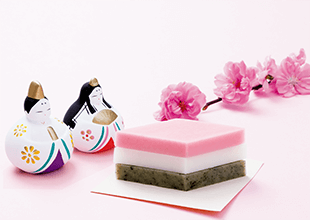 To pray for the health of girls, the Hinamatsuri Doll Festival is held on March 3. Families display special dolls dressed in brocade robes as worn by the emperor’s court of ancient Japan. Offerings made to the dolls include shirozake, a sweet cloudy sake made of slightly fermented rice, along with hishi-mochi, diamond-shaped mochi cakes in red, white and green layers. The green layer is made by adding crushed yomogi mugwort leaves to mochi. Mugwort has medicinal effects and its pungent smell was believed to drive away harm, making it a suitable ingredient in foods to welcome a new season. Another traditional Hinamatsuri dish is chirashi-zushi. This “scattered” sushi is made by spreading out sushi rice in a large bowl and topping it with various tasty and colorful morsels, including thin strips of omelet, sashimi, seasoned slices of shiitake and strips of dried nori seaweed. On Hinamatsuri it is also customary to eat shellfish such as hamaguri clams in clear soup. Sometimes live clams are given as offerings to the dolls.

The first of April marks the beginning of both the business and the academic year in Japan, and at about this time, cherry trees begin to bloom across the country. People love to celebrate this springtime event with hanami “flower-viewing” parties that bring together family, friends and colleagues to enjoy food and drink beneath cherry blossoms in full bloom. Cherry trees hold special meaning for Japanese, as they are believed to serve as a dwelling for the gods who promise an abundant autumn harvest.

For Japanese, the season from New Year’s to the flowering of the cherry blossoms is the important start, or “springboard,” if you will, for the entire year—a time of celebration and prayers for peace and an abundant harvest, and for the happiness of each and every one of us.

Yoichiro Nakamura, Ph.D.; born in 1943. A specialist in historical and folklore resources, Prof. Nakamura was formerly professor at Shizuoka Sangyo University (SSU), and is currently guest researcher at the SSU Institute of Research and Development. His major works include: Iruka to nihonjin (“Dolphins and Japanese,” 2017); Myanmar: Ima, ichiban shiritai kuni (“Myanmar: the country we’re most curious about,” 2013); Bancha to shomin kissashi (“Bancha tea and the history of popular tea drinking,” 2015); and Washoku bunka booklet 2: nenchu gyoji to shikitari (“Washoku culture booklet, no. 2: annual events and traditions,” 2016).