Annual Events and Traditions (No. 2)

Summer: From Hatsugatsuo to Tanabata

Our current series features special foods and traditions related to seasonal observances of the old lunar calendar. This second installment begins with the early summer season’s first appearance of bonito (hatsugatsuo), and continues to the Tanabata festival on the seventh day of the seventh month. Around the time the new foliage of early summer begins to emerge in the fields and the mountains turn green, the cuckoo can be heard calling in the woods, and schools of bonito travel the Kuroshio (Japan Current), which passes close by Japanese shores. A haiku written by poet Sodo Yamaguchi (1642- 1716) captures these images, which Japanese so closely associate with early summer: Me ni wa aoba / yama hototogisu / hatsugatsuo. (Green leaves everywhere / cries of the lesser cuckoo in the hills / first bonito of the season). The people of Edo (present-day Tokyo) in the eighteenth and nineteenth centuries spent considerable sums to obtain the first bonito of the season. This fish remains an indispensable part of the diet, consumed not only as sashimi, but dried and smoked into blocks of katsuobushi, which provides essential umami for dashi and adds flavor in cooking. Today in Europe, katsuobushi is so popular that a Japanese company recently set up a facility in France to produce it there locally.

In early summer, farmers prepare to plant rice. The rice seedlings are prepared, then groups of several seedlings are planted in rows in the paddies. The busiest season of paddy planting (ta-ue) is around Boys’ Day, which traditionally fell on the fifth day of the fifth month of the lunar calendar, now celebrated as Children’s Day on May 5. This annual event evolved from traditions introduced from China, including the belief that the strong aroma of stalks of sweet flag would repel pestilence and misfortune. Placing sweet flag leaves on the eaves at the entrance to a house the day before Children’s Day, then adding them to the bath that night, is thought to assure good health throughout the year. Another custom symbolizing prayers for healthy boys involves raising carp-shaped streamers called koinobori high on a pole in the home garden. As suggested by a legendary carp that swam up a waterfall and became a dragon, koinobori evoke the aura of a vigorous and auspicious fish. The origin of the carp streamers is similar to that of New Year’s kadomatsu pine and bamboo festoons (see Vol. 31 No.1). To entice the deities of heaven to descend to the fields, assuring an abundant harvest, it was customary to erect a high bamboo pole affixed with tree branches or other garlands to serve as a welcoming abode for the visiting deity. 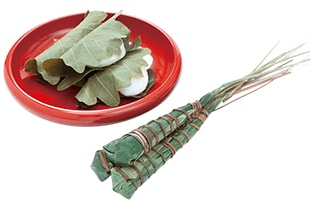 Two foods customarily made for Children’s Day are kashiwa-mochi and chimaki. Kashiwa-mochi is rice-flour dough dampened with water, steamed and kneaded, then wrapped around a ball of sweet adzuki bean paste. This is then folded into a preserved oak (kashiwa) leaf. Chimaki is rice flour and arrowroot (kudzu) powder dampened with water and kneaded into dough, then wrapped in bamboo leaves, bound with string and steamed.

During this time of rice planting, young bamboo shoots were harvested to eat, either by simmering or grilling. New buds sent forth by plants and trees in the early summer were considered precious and nourishing. Fern fronds (warabi) were soaked to remove harshness and simmered with seasonings, while buds of the Japanese angelica tree (tara no me) were plucked for tempura. The leaves of one species of cherry (Oshima-zakura or Prunus speciosa) are salted and fermented in barrels to bring out their distinctive aroma. These leaves are used to wrap glutinous rice cakes or a crêpe-dough layer filled with sweet adzuki bean paste to make sakura-mochi. Japanese were quick to take advantage of nature’s rich bounty in early summer.

In the sixth month of the lunar calendar (July by today’s calendar), Gion Festivals—the most famous of which is held by Yasaka Shrine in Kyoto—are held throughout the country. These fall in the middle of the extended rainy season when pestilence was likely to spread, and were thought to forestall the spread of disease. As the festivals coincide with the season for reaping barley, another important staple, offerings to the gods traditionally include mugi-okowa, steamed barley mixed with glutinous rice. A powder made of toasted and crushed barley was sprinkled in the path of mikoshi portable shrines paraded during the festivals. Another traditional offering is komugi dango (wheat dumplings), balls of wheat flour wrapped in broad leaves and steamed.

At the end of the sixth month, local shrines perform nagoshi-noharae, the “summer health and well-being ceremony.” The ancients believed that illness and ill-fortune were the result of defilement, and that by holding certain rituals, they could purify themselves and stay healthy. On the day of the ritual, a large wreath of fresh thatch is erected at the shrine’s entrance, and people purify themselves by following a prescribed ritual for passing through it. An associated practice was patting the body with a paper cut in the shape of a human figure, transferring to the paper any ailment or impurity, then entrusting the paper to the shrine. The priests of the shrine collected the papers and floated them downriver to banish disease and disaster, literally washing away trouble in readiness for the second half of the year. Tanabata falls on the seventh day of the seventh lunar month, and is today celebrated on July 7. This festival is based on an ancient Chinese legend that tells of two bright stars (Altair and Vega) on opposite sides of the Milky Way who meet once a year on this night. Throughout Japan it is customary to make special wishes on Tanabata: dew was once collected from the large leaves of the satoimo taro to make black sumi ink for writing one’s wishes on long tanzaku cards which were hung from a branch of bamboo. The branches were then erected either under the eaves of the home or in the fields. In some regions, the gods of Tanabata were honored by making yuri-meshi, steamed rice with lily bulb (yurine), and were presented with offerings that included a fresh yukata summer kimono and obi sash. In the emperor’s court, the day’s celebrations included making sakubei pastries of rice and wheat flour in the shape of a twist of silk thread, to be placed as offerings. That practice lingers in the custom of exchanging gifts of somen noodles during this season. Among the distinctive Japanese practices for Tanabata, it was believed that the gods made the rounds of the rice paddies on that night to bestow a prosperous harvest, and so horses would be made of straw to facilitate the deity’s movements. Much care and many beliefs surrounded the culture of rice, fostering customs of rice planting, weeding of fields, irrigation control, and other practices that culminated in a successful harvest.