Annual Events and Traditions (No. 3)

Our current series looks at the special foods and traditions related to Japan’s seasonal observances, based on the ancient lunar calendar. This third installment focuses on autumn, when ancestral spirits visit during Obon and communities celebrate the full moon and the tradition of eating grilled eel. Tsukimi-dango and susuki grass are offered during moon-viewing celebrations.

Obon: Return of the Ancestral Spirits 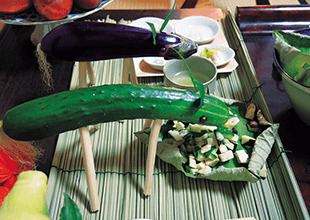 Oxen figures made of eggplant and
horses of cucumber are offered
to the spirits during Obon season.

In Japan, the fifteenth day of the seventh month by the old lunar calendar has long been believed to be the time when the spirits of ancestors return to visit the living. During the several days surrounding this date, called Obon, a series of family rituals are observed to welcome, entertain and send off these spirits. Offerings to them include rice ball sweets called botamochi, or ohagi, depending on the season, and somen noodles, all of which are later partaken by the family. Somen noodles are offered to pray for good health, stemming from an old Chinese tradition. Botamochi made on the first day of Obon, when returning spirits are thought to arrive, were called ochi-tsuki botamochi, or “settling-down rice ball sweets.” Botamochi are made of steamed non-glutinous rice and glutinous rice lightly pounded in a mortar, and formed into oval balls. These are then either coated with a layer of sweet adzuki bean paste, or sprinkled with sesame or roasted soybean powder (kinako). Both botamochi and ohagi are not only presented as offerings during Obon; they are also enjoyed at other celebrations, and shared with friends and neighbors. In some areas, it was also an Obon tradition for the community to gather at the local temple and eat their fill of udon noodles.

Bon-odori dances, also held during Obon, remain among the most diverse and colorful of Japanese performing folk arts. Young people would gather beneath the full moon and dance the night through, and it was often during these events that romance would blossom. The next day, offerings of food were brought to the seaside or riverside, where fires were lit. There, the invisible spirits would be sent off to the heavens, with entreaties to return the following year. This fire-lighting custom evolved into a special summer event held in Kyoto, where bonfires are set alight across mountain slopes surrounding the city to create the enormous character Dai, meaning “large” or “great,” to send off the ancestral spirits.

Important among Obon rituals is offering water to the ancestral spirits. Offerings may include a basin of water and vegetables such as chopped eggplant and cucumber, or sometimes uncooked rice. In some areas of the country, offerings of hot tea are made to ancestral spirits as many as 75 times a day during Obon, reflecting an old tradition of offering tea to the Buddha.

There was also a belief that ancestral spirits returned in the form of living creatures, and for that reason, meat and fish were not eaten during the Obon season. The author recalls his grandmother once telling him one night when a moth entered the room attracted by the light not to kill it, as it might be the spirit of an ancestor.

People around the world share a sense of wonder at the beauty of the full moon. Moon-viewing, or otsukimi, takes place during the eight month of the lunar calendar, when people enjoy the especially large and beautiful full moon. Tsukimi-dango are steamed and kneaded rice flour balls traditionally offered to the moon on the day of otsukimi. These are accompanied by a vase of susuki grass, an early blossoming field grass, and just-harvested vegetables such as satoimo (taro). The inclusion of susuki expresses the hope that the rice, still growing lushly in the paddies, will ripen as abundantly as the grass. Satoimo has been cultivated in Japan long before rice cultivation was introduced, so their appearance among the offerings provides a glimpse of ancient beliefs for giving thanks for the harvest. On this night only, it is the custom that children are allowed to make off with the tsukimi-dango and offerings—perhaps a remnant of the belief that when the offerings disappear, it was the ancestral spirits—temporarily assuming the shape of innocent children—who have accepted them. Otsukimi rituals are held again on the thirteenth day of the ninth month of the lunar calendar in many areas, and offerings on this occasion include chestnuts, a valued and favorite food since antiquity. Since long ago, eel has been treasured as a highly nutritious food. A custom has been passed down of eating grilled eel (kabayaki) to provide nourishment to build up physical strength during a time when the seasons are changing. Kabayaki is made by skewering sliced-open eel and grilling it with a thick and savory soy sauce-flavored sauce that contains mirin, which adds a mild sweetness. Around the middle of the Edo period (roughly 1700-1800), mirin became more widely available as a seasoning, and this helped increase the popularity of grilled eel. Interestingly, the manner in which eel is prepared for kabayaki differs between Japan’s eastern Kanto and western Kansai regions. In Kansai, the eel is slit along the belly, skewered and grilled as-is; in Kanto, the eel is slit along the spine and steamed before grilling. The lively business enjoyed by unagiya restaurants specializing in eel around this time of year is a nostalgic and notable event in modern Japanese cuisine, and one that is still enjoyed today.