Annual Events and Traditions (No. 4)

Winter: From Harvest to New Year

Our series featuring the traditional celebratory foods associated with Japan’s old lunar calendar concludes with this final installment, where we follow harvest-related events, Shichi-Go-San rites of passage, the winter solstice and finally, the anticipation of another New Year. 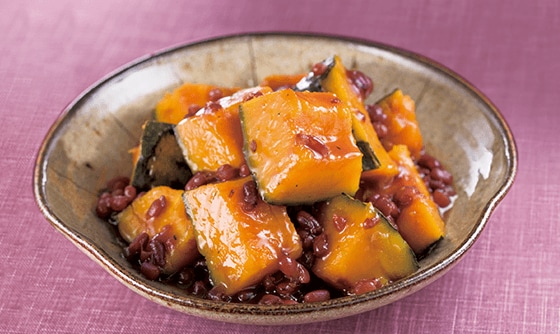 Annual events and traditions in Japan are linked to the ancient cycle of growing rice. As autumn approaches, the rice blossoms, its ears laden with tiny white flowers—and it is just at this time that the Japanese archipelago faces typhoon season. Hoping to appease the wrath of the wind gods, a special hand-twisted rice straw shimenawa rope was often hung at village entrances to fend off destructive winds. Foods piled high on bowls are presented as hyakumi no onjiki offerings at Tanzan-Jinja Shrine.

Once rice has been successfully harvested, thanksgiving rituals are held. Sheaves of freshly harvested rice are offered, and other bounty is prepared for rites honoring local guardian deities. To this day, the emperor himself makes offerings of newly harvested rice to the gods, partaking of new rice while praying on behalf of his people. This palace ritual is the Niinamesai, celebrated nowadays as Labor Thanksgiving Day on November 23. At well-known shrines with long histories, offerings presented to the gods during harvest festivals take the form of foods as they have been prepared traditionally. For example, at Tanzan-Jinja Shrine in Nara Prefecture, copious offerings called hyakumi no onjiki, or “one hundred foods,” are presented. Similar offerings are made at other shrines throughout Japan.

The tenth month of the lunar calendar marks the beginning of winter. The custom observed on the “Day of the Boar” of this month is to prepare botamochi rice ball sweets of steamed non-glutinous and glutinous rice that are coated with a layer of auspicious adzuki bean paste. These are placed in a lacquered box and shared among neighbors, a custom that reaffirms community bonds. The twentieth day of the tenth lunar month celebrates Ebisu, deity of good fortune, whose image is traditionally placed on a shelf in a corner within the home. Ebisu is considered the patron of fishing and bountiful harvests, but in urban areas, the god assures prosperity in business. Special offerings might include grilled tai sea bream and vegetables, including daikon radish. As the family gathers to share the celebration, sometimes lots are drawn to choose which offerings each person receives. Shrines dedicated to Ebisu are found throughout the country, and festoons of tree branches are traditionally sold at festivals held during the tenth or first lunar month. These are hung with auspicious decorations that symbolize prosperity and happiness, such as oval-shaped gold coins and tai. This is also the season for freshly harvested daikon. The vegetable is an essential ingredient in many family meals, appearing in simmered dishes and vinegar salads, and as pickles. During this season, rituals are held for purification against ill-fortune and to express thanks for the harvest. At shrines, worshippers are sprinkled with water shaken from bunches of broadleaf bamboo dipped in a cauldron of hot water, in a purification ceremony called yudate. In mountainous parts of central Japan, yudate involves rhythmic dances dedicated to the gods. A traditional food prepared for these rituals is gohei-mochi, skewered cakes of pounded rice basted with miso and grilled. Chitose-ame in a colorful bag

November 15 is set aside for celebrating the healthy growth of children who have reached the ages of seven (shichi), five (go) and three (san). The children are dressed formally, often in traditional Japanese attire, and presented at a nearby shrine where prayers are made for their health and happiness. The young celebrants are presented with traditional stick candy called chitose-ame, “long-life candy,” and served sekihan, made with glutinous rice steamed with adzuki beans. This rice is served on such special occasions because of its auspicious red color. The chitose-ame is made of a gelatinous barley syrup that is kneaded and hardened. It carries specific significance, as Japanese legends tell of how this syrup, given in place of mother’s milk, saved the lives of orphaned infants, thus earning its reputation as being essential to children’s health and well-being. Another tradition observed late in the year honors tools that have become worn out during the year. One such example is hari-kuyo, a ritual honoring hard-working sewing needles that have become broken or damaged. The spirits of needles used for stitching fabrics are “appeased” on this day by passing them through soft tofu or pliable konnyaku konjac. Another winter tradition, celebrated mostly in Kyoto, is daiko-daki, where temples dish out servings of daikon that has been simmered in a large pot, to help people avoid catching cold.

Toji is the winter solstice, the day in the year when the sun’s presence in the sky ebbs to its lowest; it is also the day when the power of the sun is “reborn,” and a time when notable traditional events are held around the world. In the Japanese home, toji is marked by making simmered kabocha squash and adzuki beans, foods believed to prevent illness. Fragrant fresh yuzu are placed in the bath, to ward off disease. Even as the old year winds down, preparations for the New Year begin. The Izu peninsula in Shizuoka Prefecture is renowned for its bonito, and at this time the fish are cleaned, salted and hung in the wind to make salted bonito for use as offerings. This careful planning of foods for the New Year takes place in other parts of the country as well, and some regions associate salmon or yellowtail with this special time.

As the year and its traditional observances come to a conclusion, we look forward with anticipation as the cycle begins once again with a New Year promising fortune and prosperity.