For our 2019 feature, we explore the fascinating world of Japanese tea. This first installment looks at the history of tea and where it is grown, as well as the distinctive qualities that make Japan’s tea so unique. 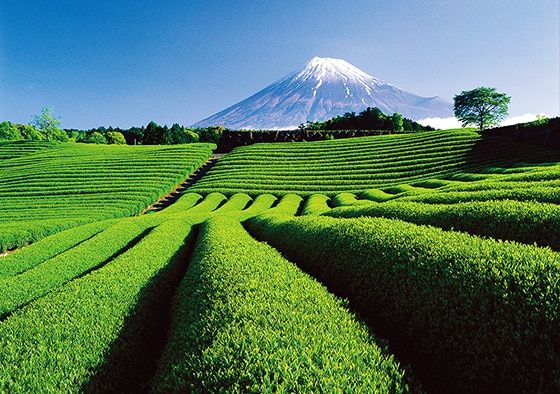 Nichijo sahanji—“Just daily rice and tea”—is a Japanese expression that captures the notion of the routine, the ordinary. Whatever else may occur in daily life, drinking green tea and eating rice are two constants, and this saying is a measure of how important a pleasant and healthy cup of tea is to Japanese.

The unique characteristic of Japanese tea is that the heating method used in its production is steaming. Green tea in China is processed by pan-roasting, but only Japanese tea is steamed, a process that brings out the umami and mellow flavor of the leaves. The main component of the umami of Japanese tea is theanine, a kind of amino acid that has calming and relaxing effects. The tea itself is greenish yellow, with a distinctive aroma.

Tea is said to have been originally grown in the region bordering China, Laos and Myanmar. Tea-drinking became established as part of Chinese culture in the eighth century, which happened to be a time when many aspects of that culture were being introduced to Japan—and tea was one of them. The standard tea in those days was prepared by fermentation, and it was distributed in a block form known as dancha. The fermented aroma of this tea did not have much appeal in Japan, and eventually the practice of tea-drinking here died out.

About four hundred years later, in the twelfth and thirteenth centuries, a method was devised in China of making tea from tea leaves that had been steamed, dried and then milled into a very fine powder, so that it could be dissolved with hot water. When this new tea, known as matcha, was introduced to Japan, it was widely accepted. Its color was a beautiful bright green, while its preparation method preserved the fresh umami and aroma of the leaves. The Japanese found these qualities particularly pleasing, and matcha quickly spread throughout the country. In China, the drinking of matcha made from steamed leaves gradually disappeared during the fourteenth and fifteenth centuries, and pan-roasted leaf teas became the predominant product in that country, whereas in Japan the production of steamed green tea continued to evolve independently. 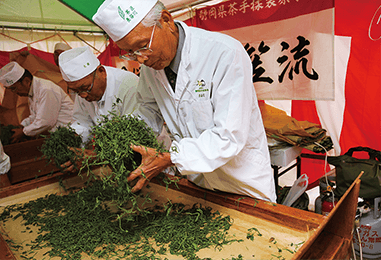 It was in the eighteenth century that Japanese green tea as we know it today was developed. This tea was made by hand-rolling steamed leaves into needle-like shapes, and drying them in order to be infused. Further green tea variations arose, including gyokuro, made from the same carefully selected leaves as those used for matcha; and hojicha, which has a light and refreshing flavor. The act of drinking infused types of Japanese teas became such an ordinary, yet vital, part of daily life that they fostered expressions like nichijo sahanji.

Today, Japan produces some 80,000 tons of tea, of which roughly 80 percent is sencha; about 10 percent comprises matcha and other powdered teas, while the remainder is made up of other tea varieties. The most commonly consumed tea in Japan is sencha, of which there are various types: fukamushi or deep-steamed sencha, whose leaves are steamed the longest for one to two minutes, rendering its color a deep green when served; futsu, steamed for about thirty seconds, a gentle, transparent and golden-colored tea; and the umami-rich gyokuro tea, steamed for fifteen to thirty seconds. Further processing of sencha results in teas such as hojicha, which possesses a refreshing roasted flavor, and genmaicha, which contains roasted rice grains. 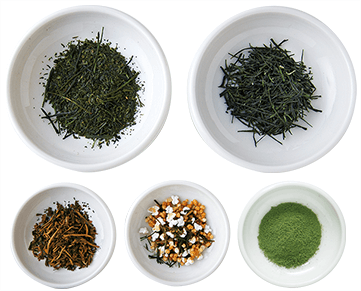 The cultivation of tea for sencha typically involves two distinct processes. One is to grow bushes in the sun until the tea is harvested, while the other involves shading bushes from the sun when new leaves begin to appear, as is the case with those leaves destined for gyokuro and matcha. Ever-growing in global popularity, powdered matcha is made by grinding the dried leaves in a mill. About 5 percent of matcha produced is consumed by practitioners of the chanoyu tea ceremony, but the vast majority is used as an ingredient in sweets and beverages, including ice cream and matcha lattes.

The production of sencha is particularly well-established in Shizuoka Prefecture, in the central part of Japan’s main island of Honshu, and on the island of Kyushu in the western part of the country. Although Kyoto is known for its matcha, strong domestic and global demand has given rise to increased production of matcha in Shizuoka and Kyushu. Shizuoka, Japan’s leading tea-producing prefecture, accounted for about 40 percent of the country’s total harvest in 2017. The prefecture will hold its seventh World O-CHA (Tea) Festival 2019 in May and November to introduce tea-related culture, research and products, while sharing the appeal and culture of Japanese tea. Japanese tea was first introduced to Europe in 1609, but after opening to Western trade in 1858, Japan’s tea exports increased globally. In particular, considerably high volumes of tea were exported to the United States. In nineteenth-century America, it was customary to add sugar when drinking green tea, while in Japan the flavor and aroma of the tea have always been enjoyed as they are. For the health benefits of tea, drinking Japanese green tea “straight” is recommended.

Mitsuru Shirai was born in 1957. After graduating from Osaka Prefecture University, he served in the Shizuoka prefectural government and has long been involved in the promotion of tea in his roles as general manager of planning in the World Green Tea Association; manager of Shizuoka Prefecture Tea and Agricultural Production Division; director of Shizuoka Prefecture Department of Economy and Industry; and vice-director of Fujinokuni Cha no Miyako Museum (Tea Museum, Shizuoka). He is a qualified Japanese tea instructor, a Chinese tea artist and Chinese tea sommelier. His authored works include Yabukita no subete (“All about Yabukita cultivar of tea”; 2007); No no fukei (“Agricultural essays”; 2010-2017); and Ryokucha tsushin (“World green tea bulletin”; 2007).