In this issue of Food Forum, our ongoing series on Japanese tea focuses on the subtleties of sencha green tea and its essential place in washoku traditional Japanese cuisine. Sencha, made and served using a kyusu one-handled teapot

In much of the world, green tea is processed by pan-roasting, but sencha Japanese tea, which accounts for 80 percent of all tea consumed in Japan, is steamed. Steamed sencha has a bracing, refreshing aroma and contains more umami than other teas. Sencha comprises a variety of teas, from high grade sencha to more common and affordable types of sencha, hojicha and bancha.

High grade sencha contains more constituents of umami compared to other Japanese teas, and thus offers a rich, rewarding flavor. It is often presented as a gift, and served on special occasions or to guests. Hojicha leaves are roasted after steaming, and this tea has recently become quite popular for its pleasant fragrance and mild taste. Bancha is made with tea leaves picked later in the season; both hojicha and bancha complement daily meals. The method of making sencha begins with steaming tea leaves that have been harvested from the fields. This heating process through steaming halts the oxidation process (allowing oxidation to progress results in oolong tea and so-called black tea). After steaming, the leaves are rolled in order to break up their structure, which allows nutrients contained within their cell components to be more readily released when steeped in hot water. Through further rolling and twisting, the leaves either form into needle-like shapes and thin rolls, or they are chopped. The technique of rolling the leaves is particularly important. Until the end of the nineteenth century, tea leaves were predominantly hand-rolled, but as tea production became mechanized in Japan, a “rolling and twisting” machine was invented in the late 1890s. Over the years, advancements to the machine were made until it came to reproduce and replace the subtle and skillful techniques of hand-rolling, making it possible to mass-produce fine sencha. Most tea today is made by machine, but some high grade sencha tea varieties are still rolled by hand, which requires great expertise.

Following the rolling process, the tea is dried to produce aracha crude green tea. Tea retailers blend aracha from different tea-growing regions and harvest seasons to create combinations of flavors and aromas to suit the tastes of their clientele. Shincha or first-flush tea (also called ichiban-cha) has an especially delicate flavor and aroma, and is marketed at high prices. 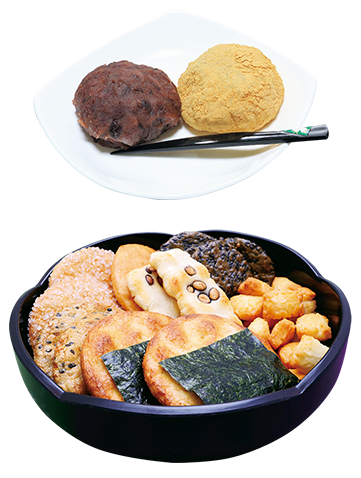 The kyusu one-handled teapot is one of the most-often used utensils for the daily drinking of tea. When brewing high-grade sencha for two people, about two teaspoons—three or for grams, about 0.10 to 0.14 ounces—of leaves are recommended. Ideally, the water should be between 55-60°C (130-140°F) and the leaves steeped for about one minute before serving; or, in the case of fukamushi deep-steamed sencha, for about thirty seconds. Water that is too hot increases the astringency and bitterness of tea; water at lower temperatures of 70-80°C (160-180°F) produces a sweeter, more mellow tea with a higher amount of umami. Hojicha and bancha teas may be steeped in slightly hotter water of 95-100°C (200-212°F) and poured after brewing for around thirty seconds so as to appreciate their unique aromas. When serving, the tea is carefully poured out gradually and portioned out evenly into several cups, so that each contains tea of a similar hue. Tea is poured out to the last drop, to enable steeping for delicious second servings of tea. Perhaps the most customary way in which sencha is enjoyed is accompanied by a sweet of some kind, in order to complement the slight astringency of the tea. Those who do not favor sweets may prefer soy sauce-flavored sembei or okaki rice crackers, or Japanese pickles. 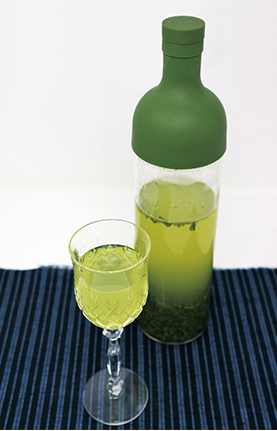 The beautiful green color and delicate aroma of cold-brewed sencha can be fully appreciated when served in a wine glass.
Courtesy of Tea Museum, Shizuoka

Cold-brewed sencha made with water and ice is currently popular. This method results in a less astringent brew containing more umami and is, above all, very easy to make. Simply place about eight to ten teaspoons, fifteen or twenty grams (about 0.5 to 0.7 oz.) of tea leaves in a 750 ml (25 oz.) bottle of water, steep in the refrigerator for several hours, then pour through a tea strainer. Drinking this tea from a wine glass allows an appreciation of both its aroma and its beautiful green color. Various new types of sencha are also attracting attention, including hybrid teas that produce the fragrance of jasmine or cherry tree leaves, and oolong tea-like aromatic green teas. Increasingly, young people are attracted to flavored teas concocted by adding herbs or dried fruit to a sencha-based tea.

In light of the busy routines of contemporary society, these days it may be more convenient to drink the bottled, ready-made teas that are sold in stores. But when time permits, enjoying sencha brewed in a kyusu has its rewards, alleviating stress and granting a moment to savor the pleasures of life. Sitting down and relaxing with a fine cup of sencha and a well-chosen confectionery is an indulgence everyone should experience.