Its Healthy and Nutritious Benefits

Our current Food Forum series on Japanese tea has been looking at the history, traditions and varieties of Japanese tea. In this final installment, we consider the health benefits of green tea and its growing global reputation. 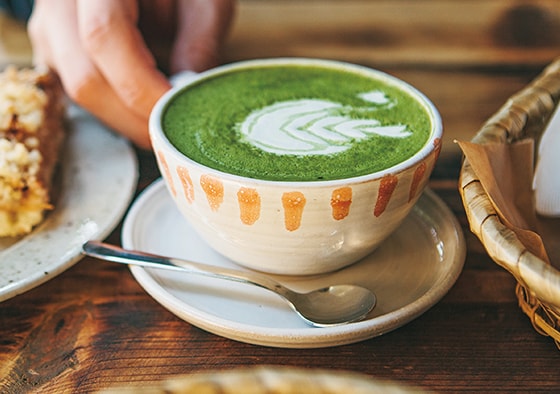 About eight hundred years ago, the Zen priest Eisai (also known as Yosai; 1141-1215) introduced tea-drinking to Japan, declaring that green tea was a panacea for all ills. Modern evidence-based research around the world now corroborates that ancient claim, with specific attention focused on the catechin found in tea.

The nutritional and healthful advantages of Japanese tea have long been acknowledged in Japan, and as contemporary Western consumer markets become increasingly aware of its beneficial properties, exports have been growing fast, with matcha being a particular favorite. In fact, Japan’s tea exports have increased fourfold over the last ten years. 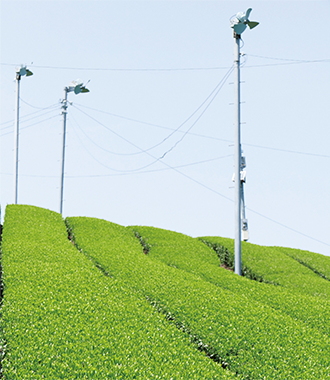 Catechin is a type of polyphenol and the main component behind the stringency of green tea. Typically, catechin oxidizes quickly in foods and is lost; however, the production process of Japanese green tea suppresses the action of certain enzymes that oxidize catechin. The resulting tea contains high amounts of catechin, proven beneficial to the body.

For example, the consumption of catechin-rich green tea has been shown to be helpful in counteracting various common ailments, including cognitive impairment, obesity, cancer and influenza. It is reported that the incidence of cognitive impairment among those who drink two or more cups of green tea per day is lower than those who do not, while the same efficacy was not evident  among those who drink black or oolong tea, or coffee. The number of those suffering from the complex condition related to fat storage, referred to as metabolic syndrome, is increasing worldwide, and studies have shown that continuous intake of high concentrations of catechin can contribute to reducing body fat. This has led to the development of various green tea drinks and other products containing catechin. In addition, recognition of the efficacy of the amino acid theanine (which gives tea its distinctive umami) as a relaxant in alleviating stress and in strengthening the body’s immunity has led to greater emphasis on drinking cold-brewed green tea, which contains high amounts of theanine.

The much-discussed issue in today’s aging society is “healthy longevity”— living a healthy life into advanced age— and studies have been conducted in those regions of Japan where people of advanced age drink ample amounts of green tea and enjoy long healthy lives. The spread of awareness of the benefits of green tea has thus led to an increased interest in Japanese tea. In order to  obtain the efficacious components of green tea and also to better enjoy its flavors, attention should be paid to the water used when brewing it. It is important to use soft water containing low amounts of minerals when brewing Japanese tea (most suitable would be a water hardness of around 30-80); making tea with hard water having a water hardness of over 120, releases fewer beneficial components and results in tea without much depth of flavor. Tap water is often treated with chlorine, and should be boiled for three to five minutes to remove such components when used to brew tea. 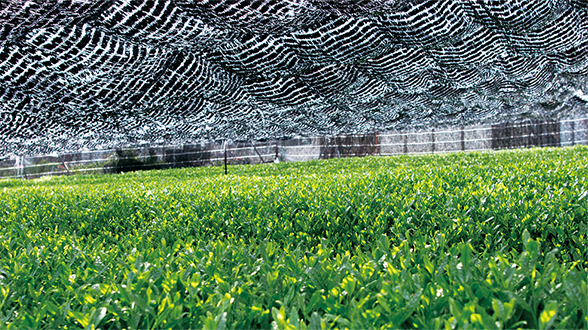 Leaves intended for matcha are shaded under canopies of special cloth to shield from the sun. Matcha is made by grinding dried tea leaves in a stone mill.
Courtesy of Tea Museum, Shizuoka

Matcha has become popular worldwide. About 60 percent of Japan’s tea exports comprise matcha and other powdered teas. Matcha is made from tea leaves harvested from plants that have been shaded from the direct rays of the sun, which therefore reduces astringency. The leaves are dried and then ground into powder using a mill. The majority of matcha is used as an ingredient in prepared foods, including sweets and breads. Such applications of matcha are thought to have begun about sixty years ago with the appearance of matcha ice cream. When in recent years a matcha latte beverage was added to the menu of a major coffee shop chain, matcha took off worldwide and is now served in many countries. Matcha, moreover, makes it possible to consume the components of tea in their entirety and so is considered very healthy—thus worldwide production of matcha continues to increase. 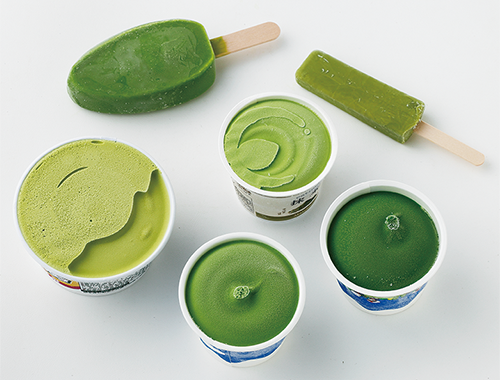 A variety of matcha ice creams

Recently, many new commodities made with Japanese tea are growing in popularity. One is high quality bottled tea to be enjoyed like wine or champagne. It is made by slow-brewing select Japanese tea that is then bottled and marketed as a new and fashionable product intended to be served in fine glasses. Recently the Japanese tea market has been expanding, with products featuring teas from individual tea-growing regions, and special blends such as carbonated teas. Other products include perfumes made by extracting the aroma of tea during the steaming process, and many are taking note of the pleasingly natural and fresh fragrances available. Other products developed by utilizing the properties of Japanese tea include soap, toothpaste and face cream. Many more products featuring the qualities and components of tea are likely to come on the market in the future.