Japanese Feasts for Special Occasions (No. 3) 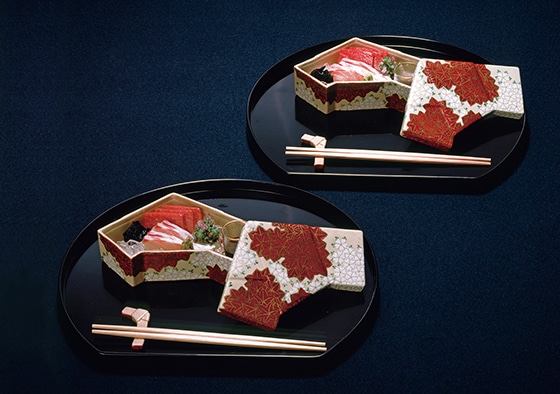 Tuna and sea bream sashimi presented in boxes decorated with unkin-de, a decorative term that refers to a “cloud brocade” pattern that integrates spring cherry blossoms and autumn foliage. This dish was served in autumn.
Courtesy of Irie Taikichi Memorial Museum of Photography Nara City

Japanese cuisine has made significant strides in the last sixty to seventy years. One of its driving forces was legendary chef Teiichi Yuki (1901-1997), who transformed traditional Japanese kaiseki cuisine by framing it within the context of modern design, creating innovative dishes deeply rooted in Japanese culture—a concept that influenced chefs in Japan and around the world. Meanwhile, there are outliers like Mitsu Chonan (1949-), dedicated to serving traditional home-style fare. Though outwardly distinct, both approaches share the same commitment to the fundamental principle of Japanese cuisine: to elicit the natural flavor of fresh seasonal ingredients.

Teiichi Yuki founded his first restaurant, Kitcho, in Osaka in 1930, followed by Tokyo Kitcho in 1961. Yuki studied the chanoyu tea ceremony and its accompanying kaiseki meals, and from his understanding he injected a distinctive aesthetic into his approach. He pursued the concept of shuko— fusing room setting with impeccable food presentation—as integral to his new style of traditional cuisine. Yuki incorporated decorative and savory touches that evoked elements of the four seasons. As one example, he conceived an arrangement of crushed ice on a lotus leaf, upon which he introduced small appetizers on three red lotus petals. This creation captured the essence of summer, presenting diners with a surprising, unusually beautiful experience. 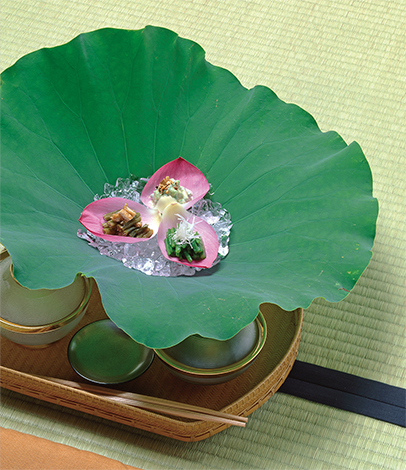 Though devoted to tradition, Yuki pursued his innovative aesthetic, often serving food upon historically significant wares; for instance, a simple dish of marinated grilled butterfish would be served on priceless seventeenth-century Oribe-ware. Reflecting chanoyu custom, Yuki gave careful attention to the hanging scroll and flowers in the tokonoma alcove, and was meticulous about the view of the garden. He placed importance on having guests comfortably enjoy both taste and atmosphere.

In June 1979, the 5th G7 Summit of world leaders was held at the State Guest House Akasaka Palace in Tokyo. Kitcho oversaw both cuisine and decor at the luncheon banquet—the first time Japanese cuisine had ever been served at a Summit. The decor reflected the summer season, and included a hanging scroll and hydrangeas in the tokonoma. The extensive menu comprised zensai appetizers: eel and burdock roll, salt-steamed abalone, roast duck loin, bayberry fruit and simmered sweet potato. These were followed by savory soup with kuzu starch-coated red rockfish and okra with umeboshi pickled Japanese apricot paste. Next was a yakimono grilled dish of sweetfish with tade (marshpepper knotweed) vinegar. Shiizakana, which accompanied further drinks, involved seafood tempura and edamame. Then came the takiawase simmered dish of kamo eggplant and taro potatoes; ishiyaki stone-grilled Omi wagyu beef and small onions with pickle salad; then rice cooked with chicken, accompanied by salt-kelp and shibazuke pickles. The meal concluded with fruit, sweets and matcha green tea.

Over the years, royalty and other elite guests from around the world have dined at Kitcho. Reflecting Teiichi Yuki’s conviction that Japanese cuisine is to be enjoyed in Japan amidst its four seasons, Kitcho has no branches overseas. The“world-renowned Japanese cuisine” that Yuki took for his motto is still regarded as peerless by Japanese chefs. 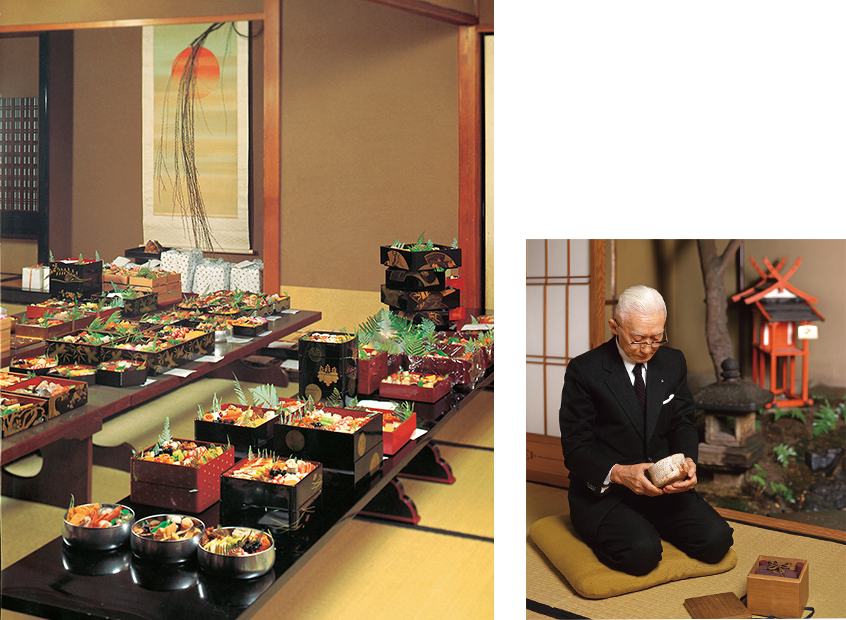 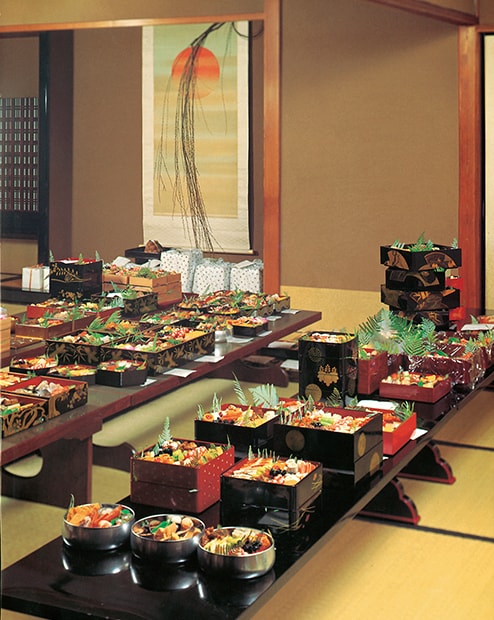 The small city of Tsuruoka is on the northwest coast of the Japan Sea, in Yamagata Prefecture. Here is where Chikeiken guesthouse and restaurant was founded in 2004 by farmer and chef Mitsu Chonan, who welcomes visitors to the rustic old farmhouse that is her home. The name Chikeiken embodies old country traditions of sharing knowledge and experience (chi) while gathered to rest (kei) under farmhouse eaves (ken).

Chikeiken serves simple traditional country dishes made from ingredients harvested from one season to the next: green and root vegetables from the farm’s fields, edible wild plants and herbs gathered in nearby woods and hills, various pickled vegetables and dishes made using dried ingredients that include taro stems, daikon and herring. The flavors are mild, natural and characteristic of simple country home cooking. Yet even basic dishes like simmered vegetables, simmered dried herring and goma-dofu black sesame tofu require considerable time and care to prepare. Dried herring, for example, is a traditional preserved food which is utterly transformed through the drying process, acquiring a rich umami and unique texture incomparable to that of raw herring. Making simmered dried herring requires mindful preparation that takes several days. Dining on such sincerely prepared dishes as this, accompanied by simmered fresh vegetables and locally grown rice, feels like being purified, body and soul. As Chonan asserts, “You can be healthy by eating foods of the season that delight your body.” She makes all the dishes primarily by herself, but never seems overwhelmed. It’s not that difficult, she says offhandedly, as while one dish is simmering, other tasks can be performed. The calligraphy, paintings and flower arrangements throughout the old wooden farmhouse are mostly Chonan’s own creations. The country-style furnishings are tastefully arranged, and the subtle tableware made by a local potter complements the authenticity of the food. Just sitting down at a table in the spacious farmhouse dining room is restful and calming. In 2014, Tsuruoka was designated a UNESCO Creative City of Gastronomy. Since that time, Chikeiken and its discerning chef have become internationally known, hosting visitors from around the world.