The Secrets of Taste in Japanese Cuisine (No. 1)

In our new Feature series, Food Forum looks at the complexities of taste in Japanese cuisine. Here we explore the sensation of smell and the essential role it plays in Japan’s food culture.

Standard ingredients used in the making of dashi, clockwise from left: kombu, katsuobushi dried bonito with shavings, dried shiitake mushrooms. Miso and soy sauce are added to the dashi.

Smell is perhaps the paramount sense that sustains any food culture; often it is smell, in combination with taste, that adds extra flavor to our comprehensive perception of food. Taste is perceived in the mouth, and smell is captured in the nose: these are two separate sensations. Only anthropoids, among which humans are included, can sense the taste and smell of food simultaneously. This is owing to our anatomical structure that connects the nasal cavity to the oral cavity, essentially equipping us with the skills of a gourmet to evaluate food through both taste and smell.
In contrast to fragrances or smells (such as perfume), which are sensed directly via the nose, we can also experience smell when food in the mouth comes into contact with air passing through the nose. This phenomenon is referred to as “taste-aroma,” known as fumi in Japanese. Taste-aroma or fumi is indeed smell; but the brain mingles it with some taste signals, which in turn creates conditions wherein it is difficult to distinguish clearly between smell and taste.
The tongue can detect five types of taste: sweet, salty, sour, bitter and umami. These comprise the fundamental framework upon which the taste of all foods is based, and might be compared to the primary colors that combine to create myriad palettes. At the same time, the mucous membranes of the nasal cavity contain about four hundred olfactory sensors, and these sensors produce a vast array of smells which, when combined with the sense of taste, create various flavors. Our sense of smell originally evolved to detect changes in the surrounding environment, so as to avoid danger; therefore, our sense of smell is much keener than that of taste, and so we are able to distinguish even minute differences.

Chefs in Western countries are adept at creating worlds of fine smells with inventive sauces by applying a range of cooking methods that involve diverse ingredients like meat, bones, seafood or vegetables. By contrast, Japanese cuisine is distinguished by the fumi, or taste-aroma, of dashi. The ingredients for dashi are straightforward, and can be used alone or in combination: kombu dried kelp and/or katsuobushi dried bonito; or niboshi boiled-and-dried fish and yakiboshi grilled-and-dried fish, e.g. sardines; or dried shiitake mushrooms. Added to the dashi are fermented seasonings such as soy sauce and miso.
With these limited ingredients, Japanese cuisine achieves an extraordinary variety of fumi. There is a secret to this variety. Japanese cuisine is defined, not by countless individual sauces, but rather, by the processes that elicit the intrinsic tastes and smells of a vast number of discrete ingredients—and this in turn opens up multifaceted worlds of flavor and aroma. Dashi is simple; but in Japanese cuisine, there are as many smells as there are ingredients. 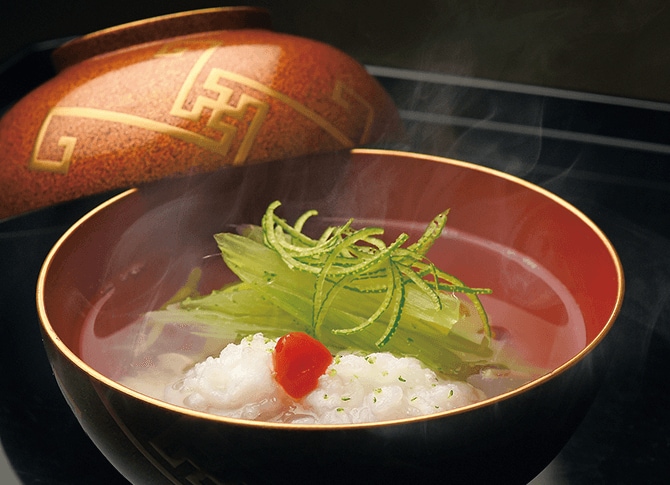 Clear soup with hamo pike conger. The delicate fragrance of dashi broth and green yuzu citrus peel wafts up when the lid is lifted.

A Japanese chef once remarked that Western chefs devote their lives to the pursuit of a sauce having an entirely original taste-aroma, while chefs in Japan spend their lives in pursuit of ingredients. This observation captures the essential philosophy behind Japanese cuisine: integrating the aromas of ingredients in cooking.

Traditional Japanese cuisine is intended to evoke the fumi of ingredients, thus the use of spices and herbs is quite limited. Japanese long onions or scallions, sansho Japanese mountain pepper, ginger, myoga Japanese ginger, shiso perilla and karashi Japanese mustard are considered condiments (yakumi), and are used to enhance fumi. In the case of soups, which may contain seafood, just a touch of suikuchi condiments is used to temper any fishy aroma and add fumi to the dish. Suikuchi may include sliced long onion, grated ginger, myoga and sliced or grated yuzu citrus. Soups are served in covered bowls, and the lid is removed just before eating. The pleasure of these soups lies in the fragrances of dashi broth and suikuchi aroma that waft up upon lifting the lid.

Clear soup with hamo pike conger. The delicate fragrance of dashi broth and green yuzu citrus peel wafts up when the lid is lifted. Bamboo shoots are boiled in water with rice bran and red chili peppers to remove aku.

In a cuisine that places importance on the fumi of ingredients, what then is the ultimate goal of taste that Japanese cuisine aims to achieve? I once asked a leading chef of Kyoto cuisine this question, and his answer was “unhindered taste” and “harmony”—in other words, a harmony of flavors, divested of unnecessary elements.

“Good” taste can be impeded by the undesirable smells of certain ingredients, and as a policy in Japanese cooking, the removal or diminishment of such elements is accomplished, not by covering them up with spices or herbs, but through the preparation of each ingredient. One example is by extracting such elements through immersion in water, thin broth or diluted sake. Acrid tastes and smells may be generated by certain components (aku) of some ingredients; these components can be removed by boiling in water with ash or rice bran. Often ingredients of differing textures are prepared separately, and the overall flavor is adjusted by the fumi of dashi at the end. The custom of carefully removing the sources that can hinder enjoyment of the flavor of ingredients is one of the reasons that Japanese cuisine is often described as “cooking by subtraction.”

Bamboo shoots are boiled in water with rice bran and red chili peppers to remove aku.

Smell cannot be expressed in words. Since neither smell nor fumi is remembered without reference to language, the only way to express these is through simile; for example, “like lemons,” or “like bananas.” Smells are directly connected to our emotions, as they capture nostalgia, happiness, tension and so on—the memory of a smell can be preserved for decades by the brain. In Japan’s temperate climate, with its four clearly defined seasons, available ingredients change markedly from one season to the next, so their fumi is associated closely with a particular season. Each seasonal vegetable has its very own distinct and delicate fumi, and this is why one of the special pleasures of Japanese cuisine involves savoring and recalling scenes of the changing seasons.

Tohru Fushiki was born in 1953 in Kyoto. He holds a PhD from Kyoto University and specializes in food and nutrition science. From 1994 he served as professor on the Faculty of Agriculture, Kyoto University, where since 2015 he has been professor emeritus. He has served as professor at Ryukoku University since 2015, and vice president of Koshien University since 2021. His many publications include Mikaku to Shiko no Science (Science of sense of taste and food preferences; 2008); and Dashi no Shimpi (Mystery of dashi; 2017).