The Secrets of Taste in Japanese Cuisine (No. 2)

This second installment in our series on the complexities of taste explores elements of flavor in Japanese cuisine, and how umami along with traditional Japanese seasonings inform the unique character of Japanese dishes. 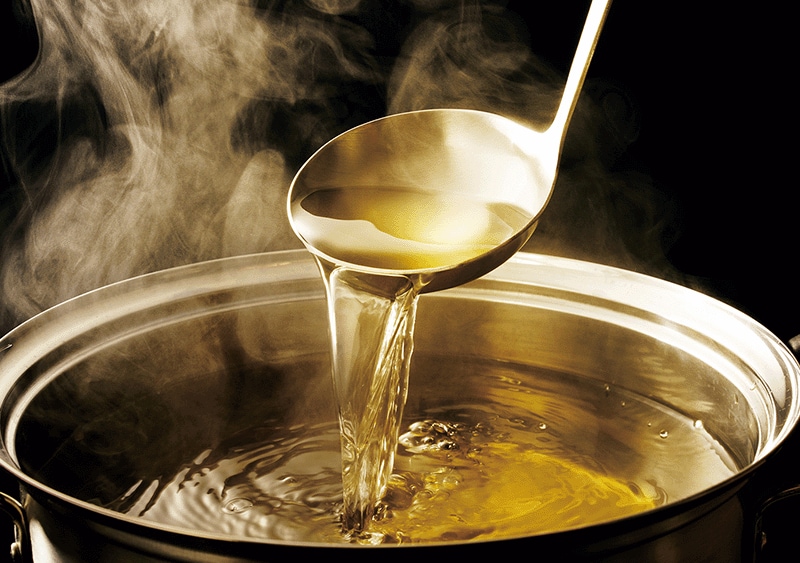 Umami-rich dashi of katsuobushi and kombu

Cuisines around the world work with various types of distinctive soups or stocks as a cooking base, and almost all center around the savory taste called umami. In most cases, such stocks involve a densely flavored soup that has been prepared by cooking the ingredients for a long time. By contrast, Japanese dashi stock tends to avoid rich or complex flavors; rather, its essential umami serves to draw out the taste of individual ingredients. Eliciting these discrete tastes is a vital element in Japanese cuisine, as they emphasize both an appreciation for nature and a sense of the seasons. 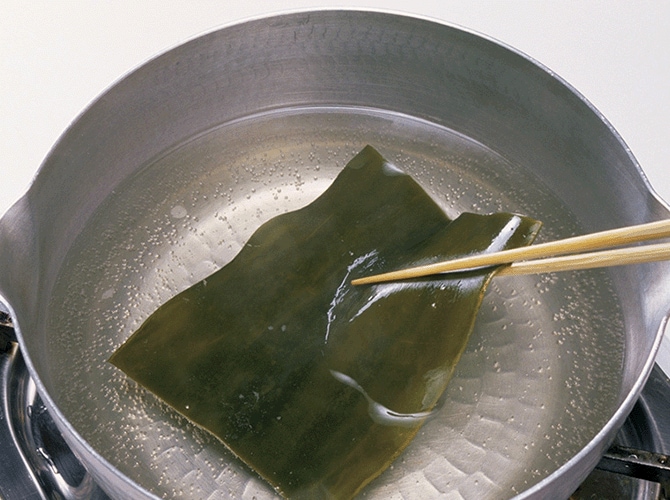 Japan’s kombu kelp, rich in glutamic acid, has long been harvested from the seas off the northern island of Hokkaido. Pure, concentrated umami liquid can be obtained simply by soaking dried kombu in hot or cold water, and the Japanese are historically well-acquainted with its taste. Against this backdrop, Professor Kikunae Ikeda (1864-1936) studied this taste and the composition of kombu, ultimately discovering umami in 1907. Umami is now recognized globally as one of the five basic tastes, together with sweet, sour, salty and bitter. The umami of kombu can be significantly bolstered through “umami synergy” when combined with the nucleic acids of katsuobushi dried bonito flakes (inosinic acid) or dried shiitake mushrooms (guanylic acid), as identified by later successors to Dr. Ikeda.

The culture of dashi in Japanese cooking is said to have been established after the fifteenth century as part of the development of the honzen dining style in warrior-class families. At the time, the eating of meat was banned in Japan, and therefore the umami of dashi and salty seasonings were what imparted dining satisfaction. By the eighteenth century, coastal shipping routes had become established along the Japan Sea, and high quality kombu harvested in Hokkaido became more readily available throughout Japan. During that same time frame, the method of producing katsuobushi dried bonito was perfected in a process similar to that used today.

Dashi consists of the umami and fumi, or taste-aroma (see Vol. 36 No. 1), of the ingredients from which it is made; e.g., kombu. The tongue has receptors that detect the taste of umami and, as with the taste of sweetness, the taste of umami (for example, dashi), is instinctively favored even by newborns, confirming that umami’s appeal is universal. By contrast, fumi is distinguished by a combination of both taste and smell; considering that preferences of smell are acquired after birth, this inclination is more closely associated with ethnic and regional food cultures. There is an inseparable relationship between the umami and fumi of dashi. 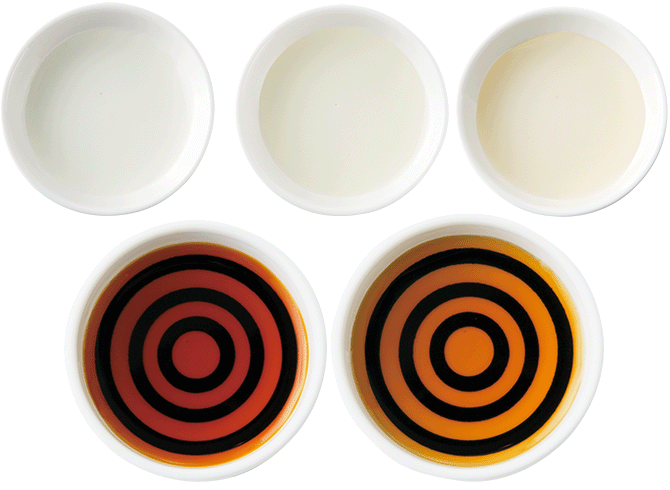 The foundational flavor in Japanese cuisine is the umami of dashi, but there are other seasonings that are used to enhance umami. These include popular koikuchi-shoyu dark soy sauce and usukuchi-shoyu light color soy sauce, along with mirin, vinegar, sugar and sake. Koikuchi soy sauce is an all-around seasoning with deep umami and gentle touch of sweetness. Usukuchi soy sauce is made with around 10 percent more salt. It is fermented and matured slowly to produce a lighter taste and color, and is intended to elicit the flavor of ingredients while minimizing the amount of salt added during cooking.

Mirin is made by fermenting rice with rice koji matured over long periods; it is sweet and contains roughly 11 percent to 14 percent alcohol. It imparts an elegant and gentle touch of sweetness while adding luster, and is also very effective in masking fishy or gamy smells. Vinegar is produced through double fermentation: first by the alcohol fermentation of grain or fruit, and then through acetic acid fermentation. Vinegar in Japan is traditionally made from rice; its varied amino acids add tang and depth to dishes, and it acts as a preservative to keep food from spoiling.

In Japanese cooking, such traditional seasonings are premixed with dashi and used as a base-flavor to ingredients. Premixed dashi is called awaseji, and the combination of seasonings and amount ratios vary depending on the dish. One type of awaseji, called suiji, is typically made using dashi, soy sauce and salt. It is used in soups, including clear soups, and has a lighter taste. Dashi flavored with mirin, sake, soy sauce and salt produces the versatile happodashi, which is used in a wide range of dishes, but primarily for nimono simmered dishes. Happodashi has a higher salt density and may be handled somewhat differently from season to season: some restaurants use primarily salt during summer for a clear, bracing quality, while in winter they tend towards a greater proportion of soy sauce for a denser, richer taste. Aside from awaseji, there exists a variety of mixed-seasoning combinations involving vinegar. Foods are often dressed with nihaizu, made by mixing equal amounts of vinegar and soy sauce for a simple strong taste, or with sambaizu, made using vinegar, soy sauce and mirin to produce a more full-bodied taste with mild sweetness. Another vinegar mixture called tosa-zu is made by adding katsuobushi flakes to sambaizu, heating, and then straining the flakes.

There is an infinite array of base-flavors, depending on proportions, ingredients and combinations. This reflects Japan’s traditions and techniques of combining multiple seasonings—in some cases during cooking, or as an accompanying sauce. Together, they ultimately give rise to the expansive diversity of flavors that exist in Japanese cuisine.