The Secrets of Taste in Japanese Cuisine (No. 3)

This third installment in our series on taste focuses on the textures of foods in Japanese cuisine, how they are perceived in the mouth, and how this range of diverse textures adds dimension and pleasure to the act of eating.

In addition to taste and smell, a key component in Japanese cuisine is that of texture. Sometimes referred to as mouthfeel, this involves the physical feel of food experienced in the mouth, such as firm, soft, elastic or viscous. Temperature and spiciness fall into this category as well. All of these sensations are recognized by the trigeminal nerves, the terminal nerves responsible for sending signals to the brain.

Interestingly enough, it has been determined that the warmth and coldness of foods, as well as stimulus from spices, are all discerned by the same receptors within the mouth. By way of illustration, the spicy sensation of chilies or peppers and the heat sensation of temperatures over 43°C (109°F) are transmitted from mouth to brain via the same types of signals. Therefore it is indeed correct to express the spiciness of chili as being “hot,” while the “cool” refreshing experience of mint is felt by receptors that respond to temperatures 28°C(82°F) and below. 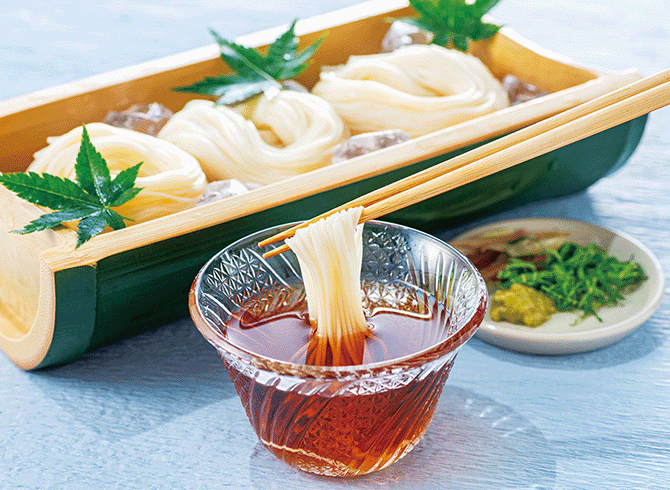 Japanese cuisine does not use many spices or dairy products, so the breadth of taste and aroma stimuli may not be very extensive; however, as suggested by the Japanese expressions hazawari (“texture felt by the teeth”), shitazawari (“texture-feel on the tongue”) and nodo goshi (“the sense of food or drink passing down the throat”), there is tremendous variation in how perceptions related to textures of food can be expressed. Fumiyo Hayakawa, a researcher at Japan’s Institute of Food Research, National Agriculture and Food Research Organization, has identified 445 Japanese terms used to describe food texture and sensation, including numerous onomatopoeic words—the most in the world, as compared to seventy-seven such descriptors in the English language, 144 in Chinese and 227 in French.1 This implies that much of the pleasure of Japanese cuisine is evoked by diverse food textures.

The textures of sashimi

There are many factors surrounding food that affect the experience of texture. Take sashimi as an example. Its preparation is relatively simple, and the seasonings and condiments used are minimal, yet the textures of sashimi vary widely depending on the size and type of fish, which allows diners to savor all sorts of distinctive taste sensations. The fatty flesh of tuna, for instance, has the velvety texture of a ripe avocado; the firm, resilient flesh of the fugu puffer fish is sliced thin to the point of transparency, such that the pattern on the serving plate is visible, yet its texture is still appreciated. From net to plate, the firmness of fish flesh changes quickly over time, and, in serving their customers, chefs prepare fish in full awareness of this timing. The yanagiba knife used to slice fish for sashimi has a special long, finely sharpened blade that chefs make a rule to re-hone each day after use. Examined under a microscope, the surface of a slice of fish cut with such a sharp blade is very smooth, showing little damage to the flesh tissue: when eating sashimi, the tongue is highly receptive to this silken texture. This emphasis on textures in Japanese cuisine is not limited to sashimi; in fact, fish meat can take on totally different forms that present agreeable variations in texture. Kamaboko fish cake, for example, is made by making a paste of fish meat, then shaping and steaming it. The texture of kamaboko can differ depending on the type of fish meat used, the firmness of the meat and the intensity of kneading the paste. Kamaboko is praised if its texture is described as koshi ga tsuyoi, meaning pleasantly springy.

In areas where it is difficult to obtain fresh fish, various dishes have been developed to highlight the varying textures of vegetables. Part of the enjoyment of bamboo shoots, burdock roots and mushrooms involves their distinctive crunchy, chewy, or soft textures when biting into them. Many pickled vegetables like daikon, cucumber and turnip also offer up a gratifying crunch when eaten. Bracken fern fronds (warabi) are a popular edible wild plant whose young stems present an enjoyable contrast of taut outer membrane and soft inner tissue. Some innovative chefs explore the countryside in search of wild ingredients with interesting textures.

One texture with a special place in the Japanese diet is that of stickiness, expressed as neba neba, found in foods like okra, natto fermented soybeans, mozuku seaweed and tororo grated mountain yam. Mochi glutinous rice cakes have longbeen offered to the gods during the New Year, and eating them is a custom that embodies an appreciation for the bounty of the divine. When mochi is grilled,the outside turns crispy while the inside becomes soft and elastic,a mouthfeel widely appreciated by Japanese. Another distinctive texture cherished by the Japanese is the silky smooth tsuru tsuru feeling of swallowing noodles. Thin delicate somen noodles epitomize the expression nodo goshi ga yoi—the pleasurableexperience of food slipping downthe throat. 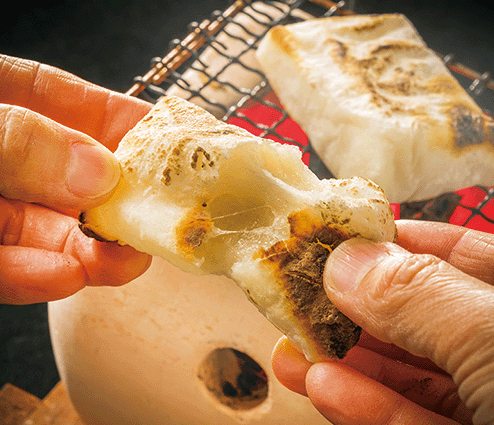 Returning to the world of sushi, another satisfying texture created by skilled sushi chefs involves the rice itself. The vinegared rice used in making sushi seems well-packed on the surface and holds together long enough to keep its shape from plate to mouth; but once placed in the mouth, it quickly—and gracefully—disintegrates gently, imparting an almost elegant sensation. This textural technique distinguishes the true professional sushi chef.

I feel that Japanese cuisine deliberately pursues opportunities to explore the textures of food in many ways. Our food culture has evolved to relish the texture of a variety of ingredients, all the while sustaining a harmony of flavors underpinned by simple, umami-rich dashi.