Soybeans are native to east Asia, and were introduced to Japan in the eighth century from China. Using soybeans as its predominant ingredient, Japan developed soy sauce, which was eventually exported to Europe; by the eighteenth century, the beans themselves had come to be cultivated in the West, where they were dubbed “soybeans,” a straightforward description of “beans for soy sauce.”

Soybeans have long been used to make other traditional foods, including tofu, miso and yuba, the delicate skin that forms on the surface of heated soybean milk. When mature, soybean pods split open and the dry yellow beans are used for various preparations. In Japan, immature unopened green soybeans are called edamame: their name is literally derived from eda, meaning “branch” or “stem,” and mame, or “bean.” Edamame on stems are rarely sold these days; today’s shoppers are more likely to see just the edamame pods in markets.

Edamame are a nutritious, tasty treat

Whole edamame pods are boiled and often served with a sprinkling of salt; only the beans are eaten. Pinching out the beans from their pods makes for an entertaining—and highly nutritious—protein- and fiber-rich treat. Both at home and in izakaya Japanese-style pubs, edamame are a popular summer snack served with beer. Japan’s northern Tohoku region enjoys traditional sweet zunda-mochi, glutinous rice cakes coated with a lightly sweetened paste of edamame. Edamame also appear in rice, soups, Japanese confectionery—even in popular snack foods. 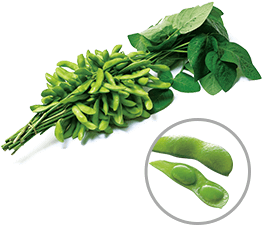 Green soybeans on branches and beans in pods

There are many varieties of soybean in Japan. Green soybeans are roughly categorized into three types: green, brown and black. Generally speaking, the green varietal is enjoyed as edamame: its pods are a vivid green and a single pod contains two or three beans. In the last decade or so, edamame have become overwhelmingly popular in the West as a tasty, low-calorie health food, where they are sold frozen in the pod or shelled.