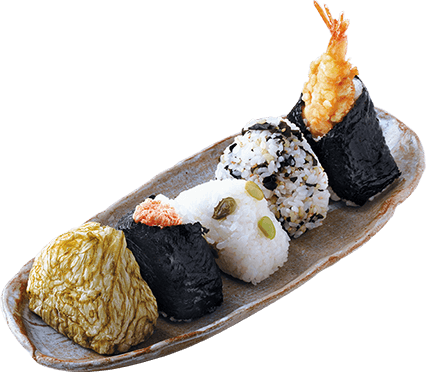 Onigiri rice balls, also called omusubi, offer such an interesting variety of fillings and ingredients, they essentially embody a full meal. Fillings can be Japanese-style, such as umeboshi pickled Japanese apricot, grilled salmon or katsuobushi dried bonito flakes seasoned with soy sauce; or they may be Western-influenced, like tuna mixed with mayonnaise or cheese with katsuobushi. Other varieties include takikomi-gohan rice cooked with meat and vegetables, grilled soy sauce-seasoned yaki-onigiri or onigiri sprinkled with sesame seeds. Specialty shops at train stations and department stores sell onigiri made with regional or seasonal ingredients. In convenience stores, where many people grab an onigiri on the run, ingenious origami-like wrapping protects crispy dried nori from the moist rice; when removed, the nori settles perfectly around a triangular onigiri.

Onigiri have an ancient history. During the Heian period (794-1185), balls of rice called tonjiki were eaten on picnics and while traveling. Onigiri were used as troop provisions in the sixteenth century, and have been carried on journeys and picnics to this day, traditionally stuffed with umeboshi, whose antibacterial properties help the rice stay fresh. Originally, onigiri were often wrapped in dried bamboo sheathes for handling while on the move; the custom of covering them in dried nori started around the mid-1800s. Onigirazu filled with ham and lettuce,
and omelet, tomato and cucumber.

The latest onigiri craze is the onigirazu, a hybrid onigiri-sandwich concoction whose origins arose from a manga comic book. Unlike traditional onigiri, onigirazu are not compressed or molded by hand, making them somewhat easier to prepare. Their fusion-type fillings are based purely on personal taste: warm rice is spread over a sheet of nori, then layered with unexpected ingredients like ham and cheese, stirfried shrimp in chili sauce, salmon and cream cheese, or omelet and bacon. The nori is then folded into a square around the rice, and cut in half like a sandwich. Not only simple and fun to make, onigirazu are visually appealing—and allow for hefty fillings that would not normally fit inside a regular onigiri.