Gyoza pot-stickers are popular in Japan, and they can be found everywhere, from specialty and Chinese restaurants to ramen shops, while frozen or chilled ready-to-cook gyoza are sold in supermarkets and convenience stores. Japanese gyoza generally refers to pan-fried yaki-gyoza, but steamed mushi-gyoza and boiled sui-gyoza are also popular.

Gyoza dumplings originated in China, where they are called jiaozi and are usually eaten boiled or steamed. They are a common side dish there, so these dumpling skins are thick and fillings consist mostly of vegetables. After the Second World War, returning Japanese who had been living in northeast China introduced the dumplings to Japan, where they eventually acquired unique Japanese characteristics to satisfy local tastes.

Gyoza might be considered one of Japan’s staple foods

In contrast to Chinese jiaozi, Japanese gyoza are eaten as a main dish, and thus have a thinner wrapping and more meat in the filling. Pan-fried gyoza eventually became the mainstay, and today are integral to contemporary Japanese food culture. In fact, gyoza are so common in Japan, they might be considered one of the country’s staple foods; certainly they are a universal favorite, often eaten as a main dish with rice and soup or as an accompaniment to ramen noodles.

While ready-made wrappers are sold in supermarkets, and a variety of prepared gyoza products are available, making gyoza from scratch at home is not difficult. Gyoza parties are common, where friends and family get together and make dumpling wrappers, fill them and cook them up. Gyoza fillings vary, but the classic recipe involves finely minced pork, shredded Chinese cabbage or cabbage, long onion, Chinese chives, soy sauce, garlic and sesame oil mixed and wrapped in dumpling skins. Yaki-gyoza are pan-fried in oil then lightly steamed, and eaten dipped in soy sauce with a splash of vinegar and/or a dash of rayu chili oil. 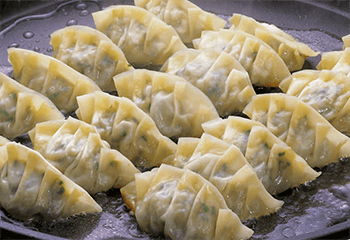 Gyoza pan-fried in oil and then lightly steamed

Regional gyoza variations include Kyushu tetsunabe gyoza, fried and served in a cast iron pan; Osaka hitokuchi gyoza bite-sized dumplings; and hanetsuki gyoza, fried with an extra-crispy crust. Two Japanese cities—Utsunomiya in Tochigi Prefecture and Hamamatsu in Shizuoka Prefecture—are both renowned for their gyoza. Each year they compete for the highest annual consumption of gyoza in Japan. They hold annual gyoza festivals and provide tours of local gyoza restaurants, all to satisfy Japan’s ever-growing number of gyoza fans.