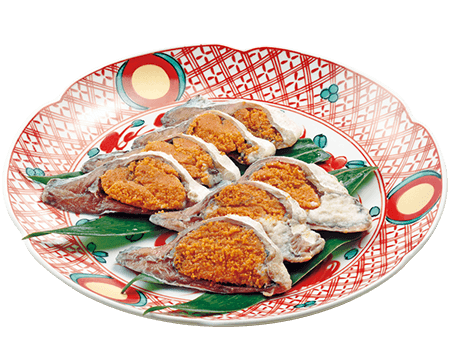 Funa-zushi is a type of fermented sushi made using crucian carp from Lake Biwa, Japan’s largest lake, located in Shiga Prefecture. This famous local cuisine is characterized by its strong scent and tart flavor, the product of fermentation by lactic acid. Descriptions of funa-zushi can be found in the Engishiki (927), a compendium of rules and procedures from the Heian period (794-1185); the dish was also paid as tribute to the Imperial Court. Funa-zushi is prepared preferably with female crucian carp with roe. It is salted for two to three months, layered with cooked rice and then pickled for another six months, during which time the meat and bones become soft. This fermentation method without vinegar is called nare zushi, and funa-zushi is considered the precursor to modern sushi. In recent years, the numbers of crucian carp have decreased, and funa-zushi has become expensive. To eat funa-zushi, the rice is removed if preferred, and the fish is sliced thinly.