A Medium of Expression

This third installment in our series on washoku explores the distinctive ways in which Japanese cuisine is used as a medium of expression. 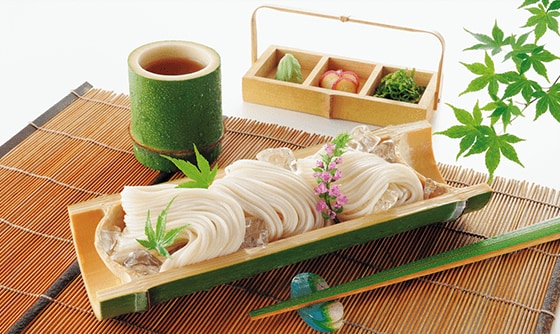 Delighting Both Eye and Palate

Washoku, as is often said, delights the eye as much as the palate. Certainly traditional Japanese cuisine is known for the way in which its attractive presentation seems to double the satisfaction of taste. In many cases, the beauty of washoku is expressed through some sign or symbol of the natural landscape; for example, in spring, when the cherry blossom is the typical motif, dishes may be sprinkled with thin slices of daikon cut into the shapes of cherry blossom petals. In autumn, an array of roasted matsutake mushrooms may be decorated with a sprig of red maple leaf or spray of susuki grass, so that the dish is imbued with a sense of the seasonal landscape.

Skill in the use of traditional kitchen knives, together with attention to presentation in the serving of food both play a major role in the appeal of the dishes served. There is a wide array of knives in Japan, each with a distinct purpose. For example, one type of knife is made expressly for preparation of hamo, pike conger, which is similar in appearance to eel and often served in summer. Hamo have a great many small bones that are difficult to remove, but utilizing this special knife, hamo may be cut at intervals of about two millimeters, leaving just about one millimeter of skin intact. The blade is large and extremely sharp, and is capable of slicing through the flesh and bones of hamo by virtue of its own weight. After this careful preparation, a fillet of hamo dipped in boiling water emerges like a delicate white blossom, a cooking method that results in a moist fillet whose umami can be enjoyed to the fullest.

Japanese cuisine revolves around the skills of beautiful presentation. Take a serving of tuna sashimi: the attractive contrast of red tuna slices arranged on a mound of white, thinly cut daikon strands may appear simple, but is in fact quite difficult to accomplish. With a garnish of green shiso (perilla) leaf and yellow chrysanthemum, accompanied by a saucer of deep reddish brown soy sauce—a color referred to as black in Japan—this dish features five colors: red, white, green, yellow and black. Traditionally, Japanese cuisine emphasizes the ideal of food that is a combination of all five tastes and five contrasting colors. Yuzu-gama shrimp and shimeji mushrooms
in a yuzu citron rind

Tableware and serving utensils are themselves important elements of Japanese cuisine. The vessel upon which the food is served is considered the “dress” of the dish. Teiichi Yuki (1901–1997), the brilliant chef and founder of the famous restaurant Kitcho, was known for his outstanding achievements in modern Japanese cuisine. Yuki planned his meals by beginning, not with the food, but with the dishes upon which it would be served. Starting in the kura storehouse where his collection of tableware was kept, he would choose items suitable to the season, also keeping in mind the personalities of those who would be at the table. Only after carefully selecting the tableware—considering not only the harmony, but also the interesting contrasts to be evoked in the shift from one dish to another throughout the meal—would he then begin to consider what foods would be suitable to serve, thus emphasizing the equal importance of the vessels to the cuisine itself.

The variety of tableware available is diverse not only materially—plain wood, lacquerware, earthenware, porcelain, metal, bamboo, glass, and so on—but in shape. Dishes or plates may be round, square, rectangular, leaf-shaped, floral-shaped, fan-shaped or have handles; they vary not only in size and depth but in design. The colors and motifs of the dishes may carry symbolic meaning. For example, use of a koyomite ceramic dish with a koyomi pattern—a stylized motif representing a traditional calendar—for food served at the end of the year evokes the rapid passage of time, making the meal all the more memorable. The chopsticks provided with particular serving dishes are also of various kinds, their use dictated by specific rules. As for the various types of tableware, their often delicate materials mandate that they be handled with considerable care.

The deeper enjoyment of washoku comes not only from attention to the tableware, but to the decor and arrangement of the dining room. Restaurants in the West often feature paintings or other artwork, but few are likely to change such decorations in accordance with the seasons. The traditional room in which a Japanese meal is served will have a tokonoma, an alcove built into the room that provides a space expressly for display. The back wall of the alcove is for a hanging scroll, whose picture or calligraphy will express some sense of the season, or a message. The host carefully selects the scroll to complement the season or connect with the sentiments of those at the table, thus expressing a hospitable spirit. For this reason, the hanging scroll is often changed. The choice of flowers as well as the vase in which they are arranged reflects the consideration of a host toward the guests. These preparations are an essential part of Japanese cuisine.

Good conversation is prized in Japan, but even more highly valued is the kind of communication that cannot be expressed in words. The role of the guest is to perceive the intentions of the host in the selection of food and tableware, as well as in the room’s decor, and to respond to it. Efforts provided by the host are not simply one-way actions: in Japan, hospitality—omotenashi—is considered to be complete when those efforts are understood and gratefully recognized by the guest, creating a rapport of mutual appreciation.