For this final installment in our series on washoku, we look at the hospitality behind Japanese cuisine and its celebratory role in various social traditions, annual events and family milestones. An Act of Community

To entertain guests or extend hospitality is called omotenashi in Japanese, and one of the connotations of this word includes welcoming and feasting the gods. The rituals observed during traditional annual events invariably involve inviting these spirits to the physical realm. To express gratitude to the gods for an abundant harvest, for example, it is customary to prepare special dishes and present them as offerings. The main event at harvest festivals is a banquet where food and drink are partaken as if dining together with the gods. The dishes consumed at events such as these are often prepared as a communal affair by local people working together. Such foods are the quintessence of local cuisine, as they are made with locally distinctive ingredients and preparation methods. Through these ingredients and cooking practices, people reaffirm and strengthen their bonds as a community. In this sense, washoku lies at the heart of Japan’s cultural and social traditions.

The most important annual household event in Japan is the New Year. Among the traditional preparations for celebrating the New Year is the making of mochi, known as mochi-tsuki, where, in a wooden or stone mortar, a batch of hot steamed glutinous rice is tirelessly pounded with a heavy wooden mallet. This eventually breaks down the rice into a sticky, chewy batch of mochi, which is typically formed into round cakes or flat squares. Families gather together and neighbors collaborate in holding mochi-tsuki events, which contribute to the bonding of communities. 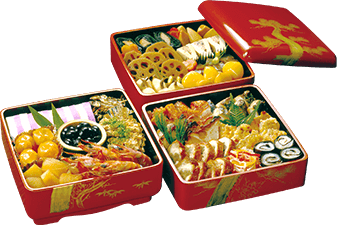 Just before the old year passes, various traditional dishes known as osechi ryori are prepared. They are presented to the god of the New Year, who is welcomed into homes on the first day of January. Osechi ryori is a combination of dishes that express people’s prayers that the new year will bring happiness and good fortune. The foods that make up osechi ryori are many and varied. They include tazukuri, which means “bountiful rice paddies,” and consists of small roasted sardines glazed in seasoned soy sauce, mirin and sugar. Then there is herring roe seasoned with soy sauce-based dashi, called kazunoko, which translates as “may there be many offspring and prosperity.” Auspicious kuromame carry the sense of “healthy and industrious”; these are sweet simmered black beans. These and other celebratory foods carry special intent and prayers for the New Year. Osechi ryori is served with special sake called o-toso, believed to disperse harmful spirits, and a soup called zoni, which consists of mochi in a seasoned dashi broth.

Food-related decorations for the New Year include kagami-mochi, stacks of round mochi that symbolize the spirit of the divine and evoke the image of having received a vigorous portion of that spirit for the New Year. Traditionally arranged together with the kagami-mochi are kombu, which refers to yorokobu, a word that conveys happiness, and an Ise-ebi rock lobster, which is associated with the Ise Shrine in Mie Prefecture, renowned as the spiritual heart of Shintoism. This festive arrangement is typically positioned in an alcove in Japanese homes called the tokonoma.

Throughout the year, and particularly during the turning points of the seasons, events are held to drive away harm. For example, on the first “Day of the Horse” (Hatsu Uma) in the lunar calendar, festivals are held nationwide for Inari, a deity associated with agriculture. This is the occasion to enjoy abura-age deep-fried tofu, thought to be favored by the fox, who is the messenger of Inari. All around Japan, many local or regional foods are prepared as a way for households and communities to acknowledge such annual milestones.

In addition to regular calendar or seasonal events, there are celebrations to mark the customary rites of passage. One of these is a baby’s okui-zome, or “first eating of food,” celebrated around the hundredth day after birth. In this ceremony, rice is touched to the child’s lips as a way of praying for healthy growth. Other important family milestones include entering and graduating school, coming-of-age ceremonies and weddings, and special birthday observances for those who turn sixty and seventy. For these and other celebratory events, it is usual to serve sekihan, steamed glutinous rice with adzuki beans. Glutinous rice was the main type of rice eaten in ancient Japan, and it continues to be used in preparing traditional celebratory dishes. The rice becomes infused with the red pigment from the adzuki beans, hence the usage of seki or “red” and han, “rice.” Adzuki beans are believed to possess the power to drive away harmful spirits. Sekihan is often accompanied by grilled tai, or sea bream. Not only are its appearance and flavor particularly favored, the name tai is identified with medetai, meaning “happy” or “auspicious,” making this dish most fitting for celebrations.

The Diminishing Impact of Washoku

Despite washoku’s time-honored and essential role in strengthening the roots of community and familial ties, its traditional festival foods and local cuisines are gradually being forgotten, owing in part to the Westernization of Japanese lifestyles. Despite the fact that washoku evolved around the country’s own bountiful and diverse seasonal ingredients, Japan’s self-sufficiency in food has decreased while its reliance on overseas imports has grown. The same ingredients are available all year round nowadays, thanks to advances in greenhouse cultivation and global transportation.

The original intent in submitting “washoku traditional dietary cultures of the Japanese” to UNESCO’s Intangible Cultural Heritage List was to serve as a reminder to the Japanese of the value of their own cultural traditions. Now, with this global validation, it is hoped that they will be encouraged to pass on their unique and remarkable culinary legacy to future generations.