Sake in Japanese Food Culture (No. 3)

The Edo Culture of Eating and Drinking Out

We continue our series on sake with this third installment, which takes a look at the customs of eating and drinking out during Japan’s Edo period of the early seventeenth through mid-nineteenth centuries, with a focus on the capital city of Edo, known today as Tokyo. 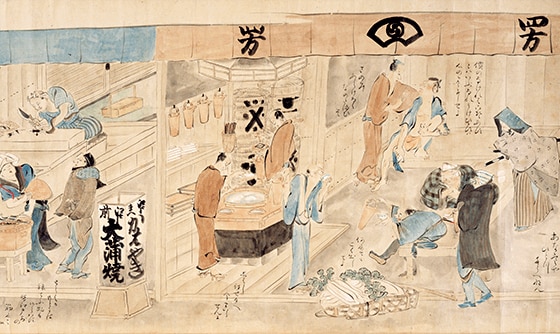 People enjoy food and drink at a niuri-sakaya shop in Edo during the early nineteenth century. Detail from the drawing Kinsei Shokunin Zukushi Ekotoba, by Keisai Kuwagata. Courtesy of Tokyo National Museum

The men of old Edo were big drinkers. During the Edo era (1603-1867), the ratio of men to women in the city was as high as three or four to one, and so this city of some one million people was rather skewed by its disproportionate number of single men. At the same time, the country was experiencing greater social and economic stability. In this milieu, shops serving food and drink proliferated rapidly in Edo, as social customs of eating and drinking out flourished.

Responding to demand in Edo, the sake-brewing coastal region of Nada, located in the Kobe-Nishinomiya area of Hyogo Prefecture, became the mass-production center for kudari-sake—sake destined for Edo. Sake brewers in the region gathered in Nada and set up breweries along the coast, where sake could be shipped out directly to Edo on cargo ships called tarukaisen. More than 800,000 barrels of sake were shipped annually to Edo, each holding 72 liters. It is estimated that roughly fifty percent of Edo’s population were sake drinkers, which works out to an estimated 102 liters of sake per person per year.

Drinking out in Edo began with stand-up drinking stalls called yatai. These stalls served accompanying dishes such as soba noodles, and dengaku grilled vegetables and tofu topped with miso. Another dish was nishime vegetables simmered in soy sauce, mirin and other seasonings. Engyo Mitamura (1870–1952), a pioneering researcher of Edo popular culture, wrote that, prior to the eighteenth century, there were no casual food-and-drink pubs such as those we now call izakaya. By the early part of that century, however, niuri-sakaya—literally, sake and simmered-dish shops—had emerged, recognizable by their façades of shoji paper panels. By the latter part of the eighteenth century, these shops were doing brisk business, and they are now considered the origin of today’s izakaya. In his 1977 story Yami no Haguruma (“Gears of darkness”), novelist Shuhei Fujisawa, who wrote on Edo-era themes, describes a niuri-sakaya: “The shop was not very large. It surrounded a kitchen that projected into the shop, with a dirt floor extending into the back in an L-shape with a counter and stools clustered around it. Only about fifteen people could fit into the space.”

It was in shops such as these that warm sake (kanzake) became popular, heated in a copper container called a chirori and served in small ceramic cups called guinomi. Accompanying foods included nishime and pre-prepared dishes of fish and shellfish, including kamaboko steamed fish cake, and tsukudani small fish or shellfish simmered in soy sauce and other seasonings.

According to Mitamura, proper restaurants began to appear by the mid-eighteenth century. Initially, food at such eateries was served on large platters. Utagawa Hiroshige’s woodblock print Edo Komei Kaitei Zukushi depicts famous early nineteenth-century restaurants, and reveals how such dishes were served in Edo teahouses. We can see live sashimi displayed on colorful sawachi porcelain platters; simmered vegetables in great bowls; and large wooden lacquer boxes, in which kamaboko and tamago-yaki rolled-egg might be served, then distributed into small individual dishes.

Around the same time, the variety of food seasonings increased: cookbooks from that time describe the use of katsuodashi dried bonito dashi stock, soy sauce and mirin. Sashimi, particularly that of various whitefish, was often dipped in irizake sauce made of boiled katsuobushi, sake, salt and umeboshi pickled Japanese apricot. Sake was served in ceramic tokkuri flasks and drunk from small sakazuki cups; it became the custom for people to pour out sake for each other, and some even enjoyed competing with each other to see how much sake they could drink. Accompanying dishes of appetizers to be enjoyed with the sake were also developed.

The mid-eighteenth century also saw the spread of the honzen style of dining, especially for formal or ceremonial occasions. These meals consisted of ichiju san-sai (one soup and three dishes, served with rice and pickles). Such a meal was modest, rather than filling: the rice in a honzen serving was small, and the soup was clear o-sumashi, intended to stimulate the palate so as to better appreciate the flavor of the sake. Essentially, a honzen meal was a kind of “sake and appetizers course.” After plenty of sake had made the rounds, miso soup and pickles were served, followed by a full helping of rice to finish off the meal.

A sake-drinking competition in 1815, as depicted in the book Gosuichoki, which records that one man drank 16.38 liters and a woman consumed 4.5 liters. Courtesy of Adachi Museum

In old Edo, any opportunity to enjoy sake was welcome. The city was a gathering place for people from different provinces throughout the country, and for the men who spoke different dialects and followed different customs, sake helped bridge the gaps and make social connections. Today, traditional customs of enjoying sake while viewing cherry blossoms or fireworks, or in izakaya and restaurants, endure throughout Japan, where they continue to enhance communication.