Let’s take a look at the differences between Kikkoman Soy Sauce and these other soy sauces.

There are countless varieties of liquid seasonings called soy sauce produced throughout the world.

The Difference: Comparing Kikkoman Soy Sauce to these other soy sauces. 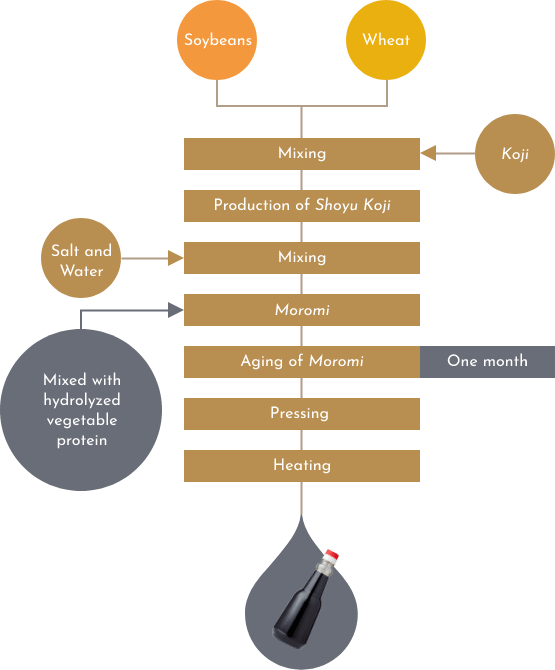 “Honjozo” is the traditional brewing method

Kikkoman Soy Sauce is produced using “honjozo”, the traditional brewing method stipulated by Japanese law. In honjozo, the activity of microorganisms plays an important role. Soy sauces made by chemically breaking down raw ingredients have a short manufacturing period, and do not require much time or effort. Contrarily, to produce “honjozo (traditionally brewed) soy sauce” which utilizes the natural power of microorganisms, several months and great effort is required.
The characteristics of Kikkoman Soy Sauce are its clear and bright reddish-brown color that stimulates the appetite and imparts vividness to each dish. As well as its complex flavor that makes the most of a variety of ingredients and brings out the characteristics of cuisine. Furthermore, its aroma is created from a blend of what is said to be over 300 aroma components. Lastly, is the exquisite balance of its color, flavor and aroma.

Soy sauce, which is made by chemically decomposing raw materials, has a short manufacturing period and requires little effort. The color of chemically-produced soy sauce is not transparent, and the taste of soy sauce itself is directly felt on the tongue, and its scent is often something that pierces the nose. Can’t be said to be balanced.

One of the raw materials used in Kikkoman soy sauce, wheat plays a very important role in producing the unique aroma of Kikkoman soy sauce that enhances the deliciousness of the dish. In addition, some of the sweetness of Kikkoman’s taste is derived from wheat ingredients. Other products, on the other hand, use wheat bran or flour instead of wheat. The difference in aroma is obvious, and the taste is also different.

The difference of additive-free versus additive-containing

There are products that are not brewed but made in a short time and without any hassle, and there are also products that use various additives in brewing. Umami is one of the characteristics of soy sauce taste. To artificially add it, MSG (Mono sodium glutamate) and yeast extract are added, and syrup and white sugar are added to add flavor and sweetness to the taste. There are also things.
The transparent red-orange color of Kikkoman soy sauce, which is also naturally produced during the brewing process, but there are products that use colorants such as caramel for the purpose of darkening the color. There are also cases where preservatives are added for the purpose of extending product stability and shelf life.

The differences between Kikkoman Soy Sauce, chemically-produced soy sauce, and additive-containing soy sauce are apparent by the differences in color, flavor and aroma. Please experience these differences with your own senses.

To understand the differences in color, place each soy sauce into a container for comparison. Kikkoman Soy Sauce has a clear reddish-brown color. For example, the color of soy sauce containing the color additive of caramel color with not be transparent, and when used in cooking, the food itself will become the color of this soy sauce.

Use a small, flat plate to smell soy sauce. Bring your nose close to the small plate containing soy sauce and slowly inhale through your nose. Within the aroma of Kikkoman Soy Sauce, created during the brewing process, you will be able to pick up on a variety of aromas blended together, including those of sweet aromas and savory aromas. Contrarily, there are many chemically-produced soy sauces and various additive-containing soy sauces that when smelt give off a sharp smell that penetrates the nostrils.

Place a small amount of soy sauce on the tip of chopsticks and allow it to drip downwards. There is chemically-produced soy sauce, as well as soy sauces to which additives such as caramel color in particular have been added, with high viscosity. In contrast, you will find that the texture of Kikkoman Soy Sauce is very smooth.

If you place 2 to 3 drops of soy sauce in your mouth, you will be able to experience the difference between Kikkoman Soy Sauce and other soy sauces. The flavor of Kikkoman Soy Sauce, naturally brewed over several months and for which great effort goes into producing, is not only salty, but is also a complex combination of sweet and sour flavors. When combined together with ingredients as a seasoning, this complex flavor enhances their deliciousness. With chemical soy sauce and those containing additives, the flavor changes with each product, and often the taste of one flavor, perhaps sweetness, is stronger, and quite often the taste of this soy sauce becomes the taste of the food. Furthermore, the flavor of that soy sauce remains in your mouth.

There are ways to tell the difference without actually opening the soy sauce bottle and pouring its contents onto a plate for comparison.

Take a look at the label sealed onto the product.
Printed on the label are the raw materials used to make the product. For Kikkoman Soy Sauce, the label states these as the 4 ingredients of water, soybeans, wheat and salt.

* Product labels are printed in accordance to the laws of each country.

Kikkoman Soy Sauce is made using the “honjozo” process, and for our products made and sold in the United States the label states “Traditionally Brewed”. This is proof that the product has been made in adherence to the brewing process stipulated by Japanese law and passed down through generations, and that it has a long history of acceptance worldwide.

Furthermore, the label clearly states that the product contains no preservatives added.

Please also try holding the thin part of the bottle up to a light source. If the product is Kikkoman Soy Sauce, you will be able to see a thin, freely-flowing, clear and bright reddish-brown liquid.

This video introduces the ideals incorporated into the design of the Kikkoman soy sauce tabletop dispenser launched in 1961, along with its shape that in now recognizable in countries all over the world.