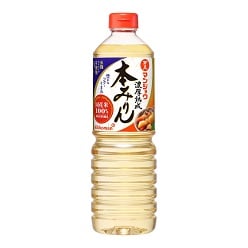 A seasoning used in Japanese cuisine. Mirin is also consumed as a beverage. It is a very sweet liquor containing approximately 14% alcohol content and 40 to 50% sugar content. In Japanese cuisine, mirin is used in simmered dishes and noodle soup base, as well as in kabayaki (thick and savory soy sauce-flavored) sauce and teriyaki dishes to add luster. The alcohol content helps eliminate raw odors, such as those from fish, improves flavor infusion and helps ingredients to retain structure during simmering. The sugar content imparts a sweetness to cooked dishes, luster to teriyaki bastes, and when heated mirin produces an even more pleasant and savory aroma. Soy sauce and mirin are a delectable combination, by using in equal parts, 1 : 1, you will be able to create the basic tastes of Japanese flavor.
※As Mirin contains alcohol, for individuals unable to consume alcohol, we recommend that you either do not use mirin or that you boil off the alcohol content prior to use (heated at boiling temperatures for 1 to 1.5 minutes).

① Steam the glutinous rice, and mix this together with rice koji and shochu distilled liquor.
② The product of ① then undergoes saccharification and maturation for 1 to 2 months in large tanks.
③ The product of ② is then pressed.
④ Liquid pressed out during step ③ is then heated and filtered.

1) Various sugars contained in mirin, including glucose and sucrose, impart a delicate sweetness to cuisine.
2) The umami components of amino acids and peptides as well as the sweetness create a rich taste in prepared dishes.
3) The various sugars contained in mirin add luster to food ingredients.
4) The approximately 14% alcohol content is effective in removing strong odors of food ingredients.
5) The small molecules allow for easy permeation into ingredients and the alcohol content functions to ease infusion of sweetness and umami.
6) The natural action of various sugar types and alcohol content helps ingredients to retain structure during simmering. Retaining structure during simmering is not only for appearance, but also is effective in preserving the natural umami of ingredients.

Kotterin has an alcohol content of less than 1%, and is mainly used to add sweetness and luster to dishes. However, as it contains very little to no alcohol, the effects of odor elimination and structural retainment of ingredients during cooking cannot be anticipated. Contrarily, this product is convenient in that it can be used, as is, in uncooked dished and is inexpensive in comparison to mirin.

Contains 10 to 14% alcohol content, and although its cooking effects due to being derived from alcohol can be anticipated, as this contains up to 2% salt content, adjustment of saltiness during cooking will be necessary.

When you do not have mirin on hand …

As a seasoning, the features of mirin are its alcohol content (approximately 14%) and the sweetness it imparts. Mirin has characteristics that are unique to mirin, however many Japanese nationals living overseas use products they are able to obtain locally to create their own recipes. First off, for alcohol content, there are some people who use Japanese sake (rice wine) or white wine. There are many variations of both of these, so selection may be difficult, however since it is the alcohol content itself that is necessary, a product that does not have strong aroma or flavor is recommended. As both Japanese sake and white wine contain between 10 to 14% alcohol, similar to mirin, this fact also makes these good substitutes. For sweetness, there are many instances where sugar and honey are added. There are many varieties of both sugar and honey, so please try out varieties locally available.